I can't watch Question Time anymore due to all the 'gammon' on there slagging off anyone who doesn't look as red or as grey as they do. But I can certainly listen to Question Time by rising star, Streatham rapper Dave, all the bloody time mate. It's a classic and I was lucky enough to speak with co-writer Fraser T Smith on the blower earlier in the year to discuss how it came about. It's an instant classic make no mistake and Fraser just so happens to be one of the nicest men we've come across in 'the biz'...

Read all about it here and listen to Question Time above...

We went to Vietnam and this is what we loved 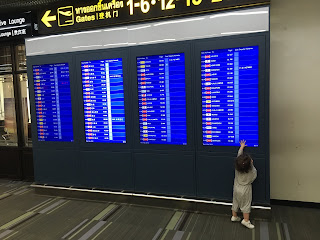 Earlier in the spring we headed to the far east for the first time in our tiny, little lives. Flying into Bangkok, after a 12 hour, vomit filled journey, we then nipped over to Hoi An before finally landing in Hanoi for a week and a bit. With our only experience of this part of the world via our tellies and the likes of bloody war films Full Metal Jacket or Apocalypse Now, we weren't sure what to expect other than being very sweaty. And potentially eating dogs? The former happened, the latter didn't but here's some of the highlights condensed into five easily digestible titbits perfect for our now puny attention spans... 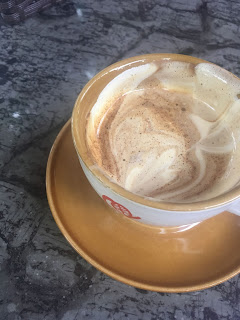 As you may or not know, we're passionate fans of les oeufs on here so the idea of adding it to ANYTHING is always a great idea. Egg and southern fried chicken. Egg pasties. Egg on burgers. Eggs in space. Eggs and cacti. It's all good innit. We had the Vietnamese delicacy near Ho Chi Minh's mausoleum in Hanoi and it was so strong it could have brought his decaying corpse back to life. Zing? Zing. 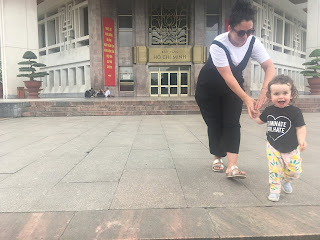 Original bad man Ho Chi Minh is loved by pretty much everyone in Vietnam. Everyone. His face is all over the place and even though he's well dead, he's still venerated as the absolute big dog. It's hard not to get swept in all the hype. 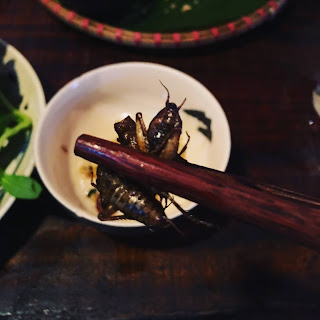 The nosh in Vietnam is second to none. From the street corners where you'll find entire families huddled round a little stove, to their legendary Banh Mi butty, there's loads of things you can stuff in your gob. There was a lot of talk about eating pooches but thankfully we were spared pouring salt and pepper over someone's pet. Instead we ended up at a joint doing fried crickets and, after several light ales, decided a plateful would be a good vibe. They taste exactly as you might think. Chewy mate. 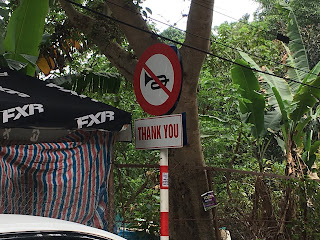 Our host described Hanoi as place resembling somewhere after an earthquake has just given it a good shake up but its people are still trying to get from a to b as fast as humanly possible. It's stuck with us as it seems wholly accurate. Everyone moves at great pace although where they're all going is impossible to fathom. Throw in loads of noise and heat and it's a total mad house. Mega vibes.

Anywhere that calls its currency 'dong' has to be respected for all of eternity. It's as simple as that isn't it?

Dancing on the ceiling 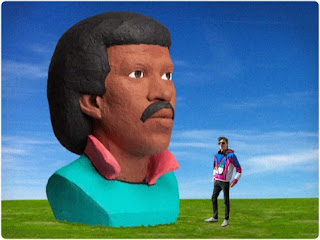 Sun, football, Brexit, Trump and Lionel Richie. Pour moi, these will be the defining vibes that memories of summer 2018 will hang from.

How so? Well we had the delicious of pleasure of interviewing the king of smooth himself, Lionel Richie earlier in the year. Disappointingly, there was no secretive meeting in a Soho bar, where he slurped on oysters and caviar while regaling a star struck moi with lusty tales of bums and bombast from the seventies. Instead, it was all very ultra safe conducted via email through layers of management leaving both me and Lionel unscathed from coming up to close to the other. But just from the emails, I know we'd get along.

Read the full feature for M Magazine.
Posted by Jimio at 15:23 No comments:

Raving for the Cause

In 2018, everyone who's anyone is heading to Tottenham to eat, drink or set up their own club or pub.

As the new stadium for Spurs nears completion, local businesses are getting ready to hopefully cash in from the huge anticipated numbers of additional visitors to the area. It's literally all to play for with the first games due to kick off this September so it's an exciting time for the place. Alongside the likes of Five Miles, The High Cross and the recently opened Bluecoats boozers, The Cause is one of the freshest additions to Tottenham's night time calendar. This new club boasts an incredible soundsystem, unrivalled outside space and late, late 5am licence while also raising dosh for local charities. Sounds good right?

Check out a wee interview we did with co-founder Stuart Glen on the venture and what it's doing to put Tottenham on the map for raving...
Posted by Jimio at 04:17 1 comment:

Labels: the cause, tottenham

One giant step for the Arctic Monkeys 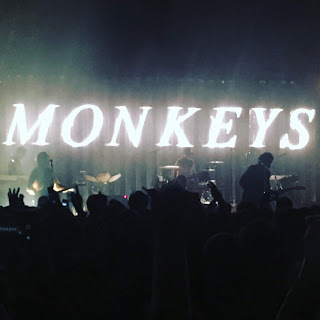 From kagoule wearing teens to Hollywood dwelling cosmonauts, there are few bands who’ve morphed in the same way as Sheffield’s Arctic Monkeys.

There are also few who we’ve grown with, who’ve soundtracked so many moments, where we can mistily of eye claim to have been there at the beginning (we were – for a bit – but so was everyone else in Sheffield – so it’s no bigs - well it is a little bit to us).

Now they’re grown hair on their faces and developed a taste for Led Zeppelin-esque fashion but they’re still great. Latest album, Tranquillity Base Hotel and Casino, initially divided but has subsequently conquered with its out-there collection of immaculately tailored songs, shifting more vinyl copies than anything else for years and is their most complete work to date.

Like their new wardrobes, it’s some distance from those initial teenage rushes of Fake Tales of San Francisco. You can’t help thinking that if you’d shown the young Alex Turner a picture of his adult self and the style tips he’s been taking, he would have snorted with derision. He might have also snorted if you’d said they’d been playing the Royal Albert Hall but the other Thursday we were among the lucky few thousand to pack into the venue for their first gig back on UK soil.

Organised at the lastish minute for War Child, this charity affair was two hours of new stuff and old stuff led by frontman Alex Turner. While the crowd was made up of lads in shades and Oasis style do's still lusting for the past, the band sounded like they'd gone into the future, and didn't let the pressure drop under the towering roof of the iconic venue. The new material, initially obtuse and difficult to crack, is now up there with their best and have given them a platform to achieve lift off in any direction they want. Boom! We left sweaty and pissed which is the best way to enjoy anything... Phew. One of the best gigs we'd ever been to? You'd better believe it...
Posted by Jimio at 08:45 No comments:

UK hip hop is having a moment 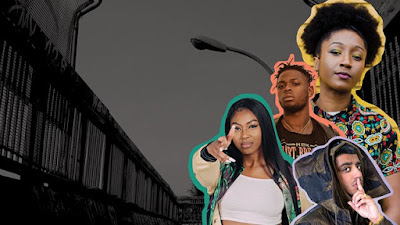 It's been a while since I moved onto new pastures from M magazine but February and March saw us back on the editorial prowl for them, writing this little number about the health of UK hip hop and how a new wave of artists including Ms Banks, Lady Sanity and Yxng Bane...

Check out the full feature in the latest issue of M mag and online now.
Posted by Jimio at 13:54 1 comment: 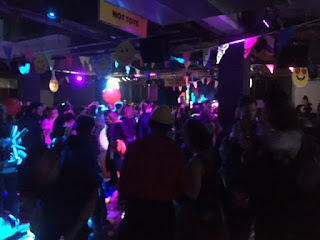 Fag ends, puddles of manky old ale and a mum breast feeding her little baby. An incongruous combination you'd imagine but one thrown together by the concept of the 'baby rave'.

While clubs attract dancers of all ages, those with babies and young children may find it harder to get out of a Saturday night, bosh a load of garies and still remain capable of looking after their brood on a few minutes of teeth gnashingly brief shut eye. So step forward the kiddy rave concept. Obviously, they're not full of families all bog eyed and crazy but they do provide two hours of raving vibes, complete with actual DJs in an actual gnarly club. For anyone sans kids, they could well be seen as an appalling attack on the wide eyed evangelical hedonism of early acid house, equally as grotesque as the sober Morning Glory fitness dances. But for those with them who miss getting loose? It's almost like the real thing. If not pretty fucking weird.

The baby rave we went to took place at Hangar in London Fields on a Sunday afternoon with drum and bass legend Nicky Blackmarket on the ones, the twos and maybe even the threes. Going in at 2pm means rather than a salubrious fitness vibe, it feels more like you're taking your kid to a bizarre after, after hours party at a gritty club. You get searched going in, then park your buggy next to all the others at the door of the club amidst the puddles of detritus from the previous evening. Inside, it's £5 a warm Carlsberg and full of mums necking rum and cokes while their children run totally amok.

With the soundsystem cranked up to standard club levels, strobes set to stun and Blackmarket laying it down amidst some glitter cannons, it feels pretty similar to a student drum and bass night with the exception of the soft play area and the scally kids throwing themselves around just like their parents used to when they could get off their nuts. We lasted two hours before it all got too weird and we had to leave, clutching our hard fought Carlsbergs and went to the nearest playground to go and decompress. So in many, many ways, not too different from past lives at all...