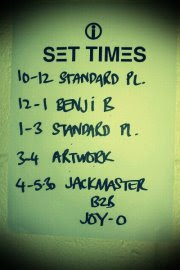 Warehouse parties in the east end of London town are ten a penny. Inboxes, flyers and posters constantly pop up promising today's dancers grimy nights in 'secret warehouse spaces' all propelled by a Funktion One sound system. But many of these forarys fail to deliver on the pre-match hype in terms of space and sonics. As a result, it's become easy to ignore the deluge of bluster and promotional blurb.

The Standard Place 1st birthday bash was a different matter. The venue, in the dingier end of Hackney Downs, was an actual warehouse where you could imagine real men in white coats slaughtering animals during daylight hours. And the Internet anticipation was something else. The promoters had a steady drip of line up revelations in the week leading up to the do, only unveiling the full girth of their aural menu on the actual day of lift off. Benji B, Oneman, Artwork, Jackmaster and Joy Orbison on the same bill is summat not to be sniffed at. So when night descended, we were totally crackling and at the front of a very lubricated pack of ravers wandering around Hackney Downs in search of the party.

Once we found the bash and clambered inside it, the vibe itself was next level. Being keen beans, we were pretty much the first punters up in the place to find Oneman laying down some serious UKG bizness in a dimly lit and metallic space. And as it filled the vibe went from abbatoir to pure bassy chaos. We were all over it, shaking our bits down at the front like a right bunch of fan boys to a fine blend of funky, house, hip hop and garage. Benji B dropped Drake's Headlines which sent our crew into serious spasms, including one team member taking it in turns to projectilve vomit and sleep in the smoking area. Oneman returned and kept the pressure tight But the cheap bar got the better of us and meant we were forced to leave just as Artwork was preparing his wonk for the dance. We walked home, stayed up until dawn and spent much of the next day unconcious in bed. Big night. Big vibes. Standard Place is anything but...
Posted by Jimio at 13:51 No comments: