Classic Is Your Friend 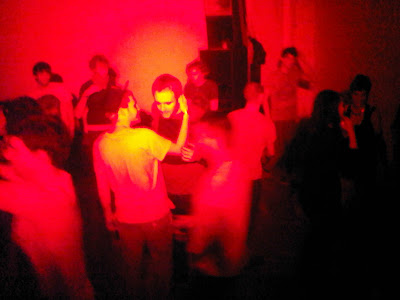 'Things that go bump in the night' is a phrase usually set aside for Halloween and the ghoulish and the ghastly. But it could also serve as a neat tag line for Classic Records and the line of thumping house music they've been pushing since the label opened its doors back in 1995. Manned by two house music heroes, Derrick Carter and Luke Solomon, Classic has proved to be a platform for injecting some of club music's finest moments into both ears and dance floors. Think Sneak's 'You can't hide from your bud' and Metro Area's Pina plus equally fruity electronic business from the likes of Swag and Matthew Herbert.

After a brief hietus following the 100th release, the pair recently decided to re-boot the label via digitising the back catalogue and making it available for all. And to celebrate, they've been running a series of parties under the banner of 'Classic is Your Friend'. We attended the one in London which was conveniently situated at a warehouse space in Hackney Downs, just a hop, skip and a stumble from our hood. In fact, the very same space where we'd got down to Oneman and his Standard Place crew just t'other week.

The vibe for this bash was much more housey and less hoods up compared with Oneman's bash. But the main room was where it was at - smoke - music - dancing - smoke - music- dancing - smoke -music -dancing - smoke. Rob Mello was dropping some seriously warm business to begin with while the smoke started to billow but it was the big DC who really showed the place what was what. He played a blend of uplifting housey house with the odd bit of disco lobbed in for good measure. But the beats were well bendy and matched our bendy feet until we couldn't bend dem limbs no more. Then it was time to retreat back to the gaff (after a brief skirmish with a shopping trolley) to keep the bend bending. Mint. Bendy. Night.

This mix from DC was the sound track to the warm up and the warm down. Still can't stop giving it some...

Kiss the Fist vs a school night 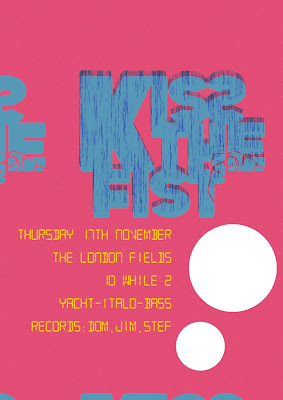 Kiss the Fist returns to the London Fields pub turntables this Thursday evening for a four hour excursion into the electronic cosmos. Friday nights down at the Fields have been the scene of many disco crimes, much memory loss and subsequent paranoid hiding underneath the metaphorical duvet. It's a school night and work is definitely on the cards the following day so hopefully behaviour won't get as unhinged as previous outings. However, never say never....
Posted by Jimio at 03:40 No comments: