Balearic Mike is one of our favourite DJs and was recently on Lauren Laverne's BBC 6 Music show to put together a selection for being stranded on a desert island. Here it is. It's fucking mega chums...

If you're not living on the edge, then you're taking up too much room... 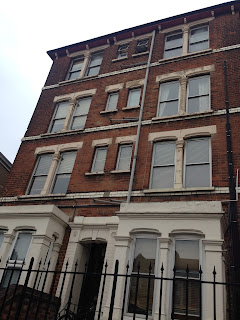 Upping sticks and moving gaff can be a big ting, especially when it comes to leaving an area you've become a part of, that gives you a sense of self and purpose. But so it goes. You can't stand still.You're just getting in the way. Move on motherfuckers!

We high tailed it out of Dalston in mid-September to our new ends of Tottenham after a year of trying. Turning mid-thirties means it's probably time to give up our old place and make way for the next wave of starry eyed dreamers who believe life starts and ends in the N16 post code. Or at least, those who can afford it - elegant slumming such as this comes at a price. But for us, with the car boot at the bottom of our bed, the Marquis of Lansdowne across the road, Super Kebab, the Basak Off Licence, the weird grumpy guys in Kristina Records, the trendy overpriced clothes in Huh, Dalston and Hackney have become embossed in our very beings.

We've seen and done many things while in Dalston. One of the weirdest was nicking a doob off the youths downstairs, smoking it, then hallucinating we were being attacked by a helicopter to the point where I woke up and ran out into the street to find out what was happening. Or when we got so battered at Bar Tipsy that the owners had to carry us home. Or when I lost my keys after my work Xmas party, so had to sleep on the steps, Or when we had people back and ripped the breakfast bar off the wall. Good times yeah.

But now it's all change. Particularly with the Nordic Loft Space next door, possibly sign posting what the future of N16 is going to look like, At least in the eyes of developers who are really those who hold the cards when it comes to etching our future. So see you later Dalston. You've been kind if not very, very silly...