Destroying the brain in Spain 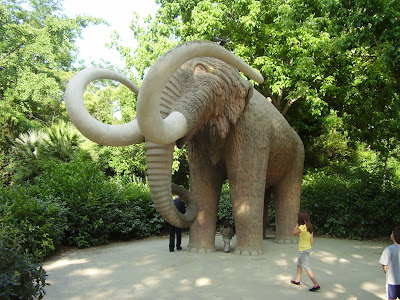 If you've even got a passing interest in owt related to electronic music, heat and pranging out, then you'll be aware of the Sonar festival in Spain.

Pour moi it's held an almost magical appeal for many years due to the large line ups and the jaw turning venue I've only been able to picture in my dreams - Turns out that the snowball of hype has been justified - the ins and outs of two aircraft hangers on the outskirts of Barcelona offer the perfect setting in which to destroy your synapses and rave yourself stupid well into the next day and beyond.

From almost the moment I rose from the coffin on Wednesday morning, thoughts were fixated on drinking. I managed to avoid hitting the Wetherspoons at Gatwick before the flight on the grounds that draining tinnies before 10am while going on holiday in a group is socially acceptable - but probably slightly less so when on yer todd.

However, this attitude of temperance was completely forgotten once landing on Spanish soil. The first eve was well beery and involved meeting random Lithuanians and chowing down on small fried fish.

After a day of wandering round the streets of Barcelona, Thursday became even beerier. We hit up the local ex-pat boozer and then drunkely headed over to the Sala Apolo to catch a slice of minimal/maximal Detroit hero Robert Hood. Unfortunately we were too twatted to appreciate his skills, instead fixating on staggering around throwing stupid shapes to the itchy house business going on downstairs and necking expensive rums. Silly? Of course but undoubtedly strong. 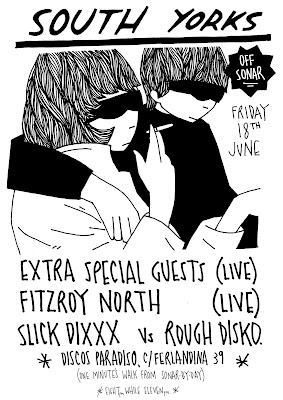 Friday was a day full of important liaisons in various nooks and crannies of Barcelona before we inevitably wound our way down to the boozer for more cheap pints, smokes and shitchatting. Our second port of call was the Discos Paradiso record emporium for the South Yorks party with Slick Dixxx, Fitzroy North and mysen playing some tunes straight out of Steel City and the surrounding environs. Despite being on during England's piss poor performance against Slovenia it was big. Props to Fitzroy North who laid down thick hunks of booty popping old skool electro. Hat off to Estrella Damn and props to whoever left a Spanish omelette lying around for pissed up ganettes to stick their teeth into. It was lip smackingly good.

You can download the mixtape the first volume of the South Yorks mixtapes here. It's massive.

So by this stage we'd already wrecked ourselves and the collective brain something rotten before we'd even arrived at Sonar's night sessions - but the two evenings we spent there were both off the chain.

Walking into the venue is like nothing else - the main room is so fucking big, there's no way they could get enough dancers in there to fill it. You could entertain a herd of elephants in there and still have room for a double decker bus drag racing contest. The ease with which one could enter the festival was also duly noted. No dogs, no frightening Spanish feds on horseback and subsequently no rules.

If you're in a small party, you'd do well to chain yourselves together using handcuffs, bluetack or chewing gum. We spent a good two hours wandering around trying to find each other. But it was a sweet eve with Hudson Mohawke proving to be a highlight. We missed Carte Blanche but they looked amazing when they were doing this...

Saturday morning was spent in a very murky state before we ended up heading out to pick up cigarettes and inevitably ended up back in the pub.

The second evening was even more intense and beautiful than the first as we decided to opt out from drowning ourselves in lager and instead destroy ourselves by any other means possible. We only lost each other for ten minutes while we were functioning as part of an even bigger crew of fellow fuckheads, which shows just you with it we were. Music wise I can tell you a lot more as I have actual memories rather than just hazy, blank patches - Roxy Music were old and dull and didn't come fluttering with angel eyes where as Herbert was too techy for our mushy minds to handle.

The Chemical Brothers were surprisingly good playing only new bombs while dubstep don Caspa smashed the place to pieces with this. Stadium trance. Ooh-eer?

After that it was all about the dodgems and DJ Hell. Dancing to techno in the sunrise in Barcelona was almost as life affirming/threatening as being driven by a lunatic on the dodgems for half an hour. But you could smoke during both practices so it was all fine. Here's Hell on someone else's camera phone. As you can tell the vibe became extremely gnarly, especially the lighter it got...

Saturday night ended at some stage on Sunday afternoon by which time we weren't very fine at all. Worse than bad. I'd lost my voice and my compadre had lost his brain. But it was obviously worth it, despite the mild life panic I went through over the days after and on returning to Blighty. If I do it again, I'd like a doctor, a green grocer, chiropodist and mumsy all on standby at the airport. Plus another 4 days off work. And a sedan chair to be carried back in. But props to Mr Stu, his hospitable chums and everyone else we drank and drank and drank with. It was almost too big.

The images below are the only ones I managed to take over the whole five days. Team Mongoose doing what it did best. Being pissed in the kebab house. Snakes. 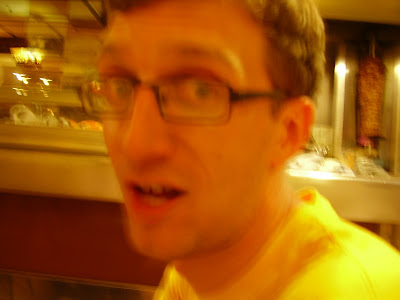 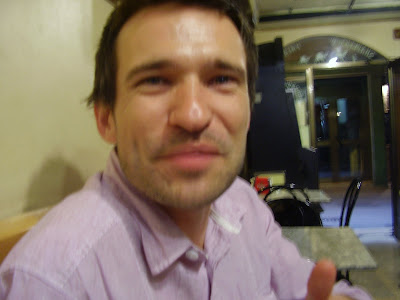