Lovebox was a lot 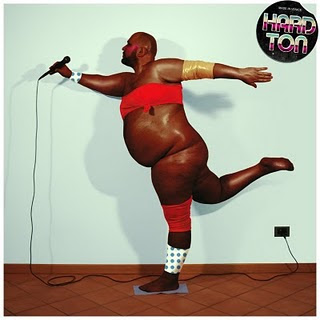 Groove Armada's Lovebox festival went down the other weekend in Victoria Park. In many ways it went off much more than it went down due in part to a strong line up, intense heat and even stronger merch.

We spent the Saturday evening outside the arena listening to the pensionable Roxy Music meander languidly through a smattering of hits and more obscure selections while watching the more messy contingent of the crowd get booted out. One young lady in particular was a sight to behold. Dressed in a leopard skin dress ting, she was unceremoniusly given the hoof before propping herself against a tree and screaming 'You're all cunts' at the top of her lungs. I've never heard such whinging from someone so totally out of their mind. She went for fucking ever.

Another dude in a cowboy hat rocked up sporting slightly more sunny vibes by arriving in a mutant tricycle. He spent the eve peddling up and down the track in front of us giving people lifts with a cart, which, like that girl, appeared to be increasingly on the brink of collapse. Make no mistake - the vibe was strong out there.

Sunday was our day, Grace Jones our woman and it was another scorcher. The afternoon passed in something of a blur, mainly due to a slightly twisted notion that as we were going to work the next day, the murkage should descend much sooner than later. This way bed would come easier, therefore making the forthcoming day at the office a more palatable proposition. Predictably this backfired on a massive scale. It meant we succeeded in massively high levels of self murkage. Headliner Grace Jones is a very hazy recollection. Although I do remember My Jamaican Guy.

Derrick Carter smashed it in the dust of the Rizla stage, which is fast becoming my favourite spot at any festival we visit while Cut Copy provided the perfect soundtrack to jumping up and dwon while smashed on cider. I spent an hour on a park bench after the festival necking beer in a vain attempt to calm down while conversing with a fellow fuck head about the healing qualities of liquorice rizla.

You can find a review of the day I pieced together down here.

The image above is the singer out of Hard Ton. They release records on International Gigolos, make music which is possibly utter rubbish but have one great idea. That record sleeve. It's amazing...
Posted by Jimio at 15:21 No comments:

The art of promotion 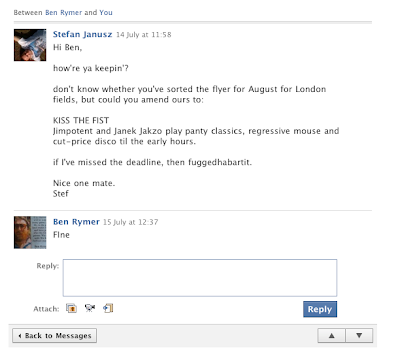 There's much more to being a DJ than just playing records. While tunes are your bread and butter, you also need to be an eloquent communicator, be able to strike up effective working relationships at the drop of a hat while having the talent to nail deals.

Ex-Fat Truckers man now DFA dude Ben Rymer shows he's got more than most in this exchange with Kiss the Fist player Chinchilla.

This is how we do it in Hackney. It's that simple. Safe.
Posted by Jimio at 14:35 No comments: