Brandishing an AK47 in Amsterdam 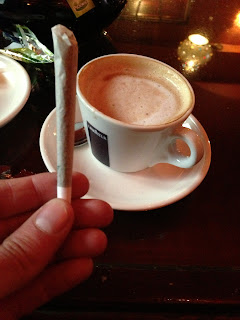 ‘I’ll have the AK47 please. And two cappucinos’.


You’d be forgiven for thinking this was some sort of relaxed arms deal. But nothing was blown away in this transaction. Apart from perhaps our minds.

This opening exchange went down in the first of many visits to various cafés in Amsterdam. Oh yes. After plenty of talk, action had taken place and we’d made it across the sea to the Dutch home of nefarious behaviour. As such the middle of day one on our recent jaunt seemed as apt a time as any to start chonging on the good shit - we spent the next 36 hours cackling like hysterical, red-eyed hyenas.

Our trip had begun the previous evening via an overnight ferry to take advantage of the first bank holiday of the year. And the tone had been already set by getting extremely carried away by the wonderful attraction of a smoking room on the boat. Despite this small, foggy oasis seeming to be full of chain smoking children, we  sat back and supped on lagers and smokes until the bar keep had to shut up shop and usher us to bed.

Unsurprisingly, our first morning was one born of much confusion. Woken up by the ship’s alarm call of ‘Don’t Worry - Be Happy’ at what felt like an early hour, we’d rushed down to breakfast almost too late to eat owt. We made the most of the five minutes given to us by making a heap of bacon butties, tying them up in serviettes and legging it off the boat just in time to catch the train to the ‘dam.

Our stay was to the west of the city in the apartment of a camp, muscly dude called Anthony who’d I found on the internet. His apartment was lovely with a walk in shower thing and plenty of cruising ground flyers but we barely spent any time in there apart from to kip. The vertigo-inducing, anorexic flight of stairs which he bounded down to greet us when we arrived added an extra frisson of danger to our two days of going Dutch.

Our wee stay involved a relaxing routine of walking up to Anne Frank’s house and looking on the queue in aghast, then hitting up a coffee joint for a sugary hit of caffeine and massive bifter. When the smoke got too pungent, we’d level out with a refreshing lager and a bacon butty we’d nabbed from the boat. And so the routine for our stay was set. One of the realest moments was seeing a fellow elderly toker finish a particularly stinky reefer, then make off really slowly on a mobility scooter. Vibes to that old man.

We were in bed by ten on the Saturday due to being overly baked but got up the next day to take bikes round Vondelpark at a very pedestrian pace, then hit up the café scene for more vibes, this time in the sleazy heart of the Red Light District. It's undoubtedly a pretty weird place. Liberating, otherworldly, bleak, shocking take your pick. But going for a mooch round there baked is probably wise. Then hitting up Amsterdam’s cheese museum with shit loads of free samples is even wiser. We didn’t pay for one piece of that fromage.

It was at this point of cheesey overindulgence that our good luck came to an end. After eating the starter of a thai curry, we realised it was hugely expensive and did one before becoming hugely lost on the canals. We and walking around in circles for an hour and a half.before being forced to hail a taxi back to our home. Which turned out to be just around the corner from where we’d set off. Classic stoned flex.

Leaving Amsterdam is where the fun of the last two days catches up with you. My paranoid fug didn’t abate for a couple of days while I was incapable of navigation or rational thought on the way home. Thank god for the cinema on the ferry back. A Good Day to Die Hard has never felt more apt… 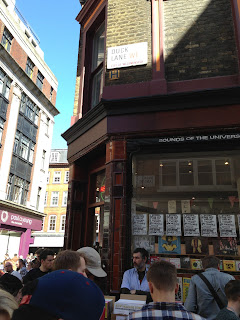 Record Store Day was perhaps the first properly hot day of the year - and was suitably ridiculous as a result. It was a 24 hours in which we drank a lot and didn't do a single bit of record shopping.

We kicked off proceedings in Soho for the Sounds of the Universe street party. It featured the skills of Floating Points and Thristian from the Boiler Room and allowed us to let our inner nerd out. This proved to be a right riotious sunny vibe and a mint place to spot celebs, in particularly Jarvis Cocker who mooched past with his young son (who looks exactly like him) and his wife (or sister - who knows). We caught some of Steve Mason performing Dry the Rain on Berwick Street and managed to sink a proper skinful before wobbling off on our bikes.

After narrowly avoiding death on the roads, our next stop was Nando's where we saw a whole set of cops getting their chicken on (why are they always in Nando's?) and I managed to prove just how pished I was by losing my piece of poulet. The slippery, greasy bit of bird shot off the plate and straight onto the floor as soon as my blade touched it.

After blowing the hair off and noshing the lot, we did one to the sanctity of the Kingsland boozer. Here things began to become unhinged. We witnessed a ferocious dance off between two old gentlemen who were completely out of their fucking minds. They boogied like true gents half their respective ages before we got locked in an hour-long conversation about football. It's indicative of just how daft the game is that we were able to keep up the pretence of being avid fans without or fellow conversationee/victim having any inkling to our ignorance. Phew.

It was then on to more familiar territory by heading down to Concrete for the evening's Bugged Out! session with Oneman and Martelo. These two are perhaps London's finest party starters and provided a suitably energetic display to ensure we danced and drank until the very end. The following Sunday was one full of confusion and random wandering in a desperate bid to sober up and regain brain cells. Standard businesssssss....