This year marked our first Glastonbury Festival experience. I know. For those who realise how much we love a good pillage it must seem weird that we've left it until now to visit but previously the organisational demands have always proved too much. Plus when you're left with the BBC experience and think the festival is mainly about the hemp-stuffed, mumsy gnatterings of Jo Wiley, and Mark Radcliffe from the BBC hot tub it's not that appealing. But the reality is a more full on experience than the wildness equivalent of choosing a different kind of hummus from Ocado.

Our recent jaunt to Worthy Farm was through the filter of work. But that in its own way had a weird charm. It didn't get in the way of drinking heavily throughout or really going for it once dark had fallen. Plus our tents were fully erected (weeeeeeeeeyyy) when we arrived, there was a free air bed, plus they even sorted out the choo choos there and back. Shitloads of things went down and we saw shed loads of great stuff. Here are just a handful of the many thing we learned...

The festival offers one official lager and one official cider - Tuborg and Thatchers respectively. Outside of events such as this, the former would be the slightly more appealing choice but here on the farm, cider is the only thing worth necking. Somehow it's an inconspicuous drinking friend for days on end, although when it eventually explodes inside your mind, you (and everyone around you) knows about it...

Hot Chip are one of the best things ever

Like the best bits of Prince, Talking Heads, LCD and Chic all rolled up into five nerdy white nerds, Hot Chip stopped being geeks and brought the funk on the Friday night of Glastonbury. Their bro-in with Caribou over the Boss's Dancing in the Dark was one of the greatest tings ever. Bravo Hot Chip.

It's (a bit) massive

Before you go all you hear is everyone bleating on about how huge Glastonbury is, how many people there are and how many different types of falafel one might be able to procure. It is indeed gigantic compared to any other festival you've been to meaning finding chums can be tough once you've enjoyed 15 ciders or night's curtain has dropped. At the same time, if you wait for everything to wear off and daylight to land, then you can get from one side to the other in ten minutes. Fact.

Lionel Richie has got it in spades

This year's old fogey's slot was taken by the man himself Lionel Richie. After the let down that was some of Kanye the night before it was down to the Commodores dude to bring the party. And party he did. If there had been a ceiling, the whole Pyramid stage field would have been dancing on it. Instead it felt like the greatest wedding disco ever...

Falling off the bike and getting back up again 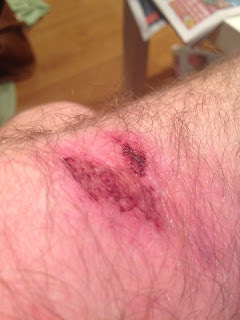 One fell off the bike back in June going round a corner really, really hungover. It hurt, it was a bit embarrassing and the road rash was gnarly. You'll be pleased to know that the wheels (aka 'Jon Benet') is okay.
Posted by Jimio at 13:51 No comments: 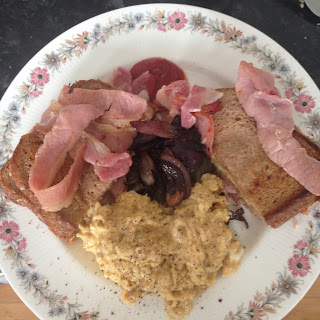 There's another ad doing the rounds at the moment, except this one is to broadcast the existence of a thing of wonder and mouth watering beauty - a cheese toastie wrapped in bacon being given a fucking good frying.

It looked so amazing from the ad that one hungover Sunday we tried to recreate it with some watery bacon and a shitload of cheese. It didn't quite work as it's tricky to make the bacon stick plus it also makes you feel deeply weird after you've eaten it as it's about 40,000 calories. But we did it anyway. Check out the peculiar results... 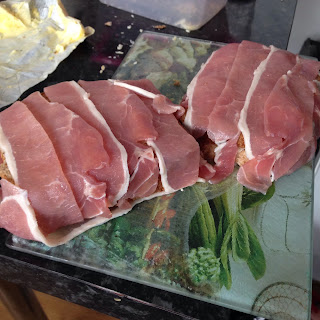 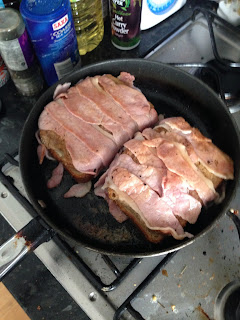 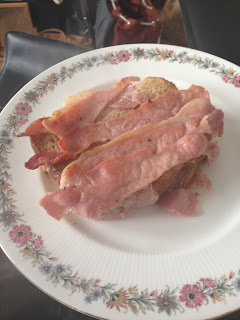 The cringey curse of Cortana 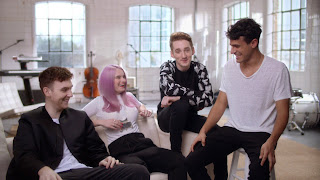 The wild combo of being in a band, being young and posh plus having your roots in the classical music gene pool is never going to do too much for your kudos.

So in some ways, it might be nice to feel a slight amount of pity for Clean Bandit, a group who are all that and more. A teeny, weeny, weeny smidge of sympathy. A micro dot. A smudge. A glimmer.

This band of Cambridge classical music graduates are posh and smug but thanks to a winning way with a pop hook and a string sample, they've managed to get pretty far over the last two years, blitzing the charts, selling shitloads of records and playing rammoed gigs to loads of kids who mistakenly think their hybrid of club and concert hall is edgy. In fact they were literally flying until they had the misfortune of meeting Microsoft's answer to Siri, the mealy mouthed Cortana, in a telly advert so bad it's pretty much put a bag over the head of their career.

Microsoft must have waved a considerably sized cheque in front of their faces for them to do it - one so big that it dislodged the silver spoon wedged in their collective arsecake, blew up their synapses and convinced them that speaking to a servant voice coming out of a phone was a good thing to do. Well the fuck nuts were wrong. Every time you hear the word 'Cortana', it's now in a faux posh accent combined with a jutting, tanned chin aping the magical dialogue and acting of the ad. Then followed by the words 'cunts'. It's fucking awful and unsurprisingly the band have kept stum ever since, possibly because they're too embarrassed to fan by the flames of hatred via further interviews or adverts. Their press people are crossing their fingers, wisely hoping that by saying nothing, the group will someone claw back enough credibility to continue.

While Clean Bandit are now letting their increasingly shite music do the talking, what of Cortana? Well we keep spotting the bastard out on the streets. Answering increasingly shitty, smug questions. Shoot to kill! 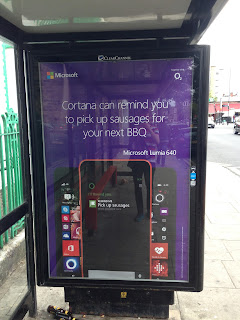