It's a Porto ting 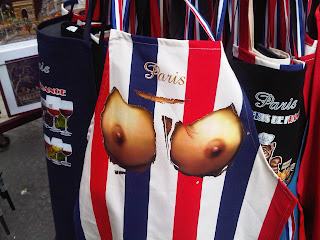 Festivals abroad are always a vibe. Whether it's the crazy cheap drink sizes, bands not appearing on stage until dawn's crack widens or the glut of weird pikeys with hounds selling tablets, the majority of events outside the UK have panache in spades and don't usually bully you into drinking Tuborg. But our experiences at the Primavera Sound bash in Porto in June didn't quite live up to these expectation. We had a grand old knees up - but in spite of, rather than because of, being at the festival.

Our trip to Portugal (subtitled 'Operation Nork's Watch') began early doors and kicked off almost inevitably with the obligatory pint and fried breakfast in Spoons. It was much needed fuel as our journey to Porto was long. Instead of opting for flights, we'd decided to travel 'in style' on the way down and utilise both French and Spanish internal choo choos. Our first venture took us via Paris, where our lack of French made simple acts and interactions tough. But being lads 'n that, we didn't let it get in the way of us hitting a bar and fearlessly beginning the week-long, semi-constant consumption of cigs and beers which constitutes a holiday. That afternoon we climbed aboard our lengthy train journey down through the spine of France - a shit head session and frantic, nervous smokes on random platforms scattered across the country's posterior were all taken down. Our third train was less glamorous - it saw two of us sharing a cabin with a small man and his sharp snore. Our bunk beds were only big enough for a large baby. On this evidence, travelling by train really is the only way to travel...

Porto wasn't exactly the tropical paradise we had convinced ourselves it could be either. Arriving in a thick drizzle reminiscent of the the Pennine Way, we were all mildly surprised by how run down the joint was and endured a meal which was more Blackpool than Balearia. Being philistines, we also made little efforts to get to grips with Portugese - so being understood was all about massive hand signals, over confidence and raised voices. Classic Brits on tour business. But hey ho - we had a roof, beers, smokes and witty banter. You can't get a gaggle of lads down...

The festival kicked off on the Thursday and proved to be a thoroughly odd affair. The vibe was very much on a Pitchfork tip - so imagine multitudes of indie schmindie types skelping around the site's rolling fields and hanging around the ATP stage waiting for another crooked guitar line to wend it's way out of the darkness. It said a lot that for us and our non-math rock loving outlooks, our musical highlights were bands supposedly well past their sell by date but in possession of that simple concept; 'the tune'. The Rapture 'smashed it' on the first evening with their still virile take on guitar dance but Suede proved to be a revelation - they sounded as sinewy and as tight as singer Brett Anderson's waist line, which is unbelieveable considering how ancient they undeniably are.

As a result of this constant dearth of decent music and chemical stimulation (the Portugese drug laws are scary), we spent a great deal of our festival experience drinking heavily and eating KFC - meaning by the time something good did finally land in our ears, we were so out of boxes that the only way we could go was home. A case in point was catching Glasgow's Numbers crew - they played some classic bleep on the Friday. But we'd had so many caipirinhas by this stage, that one of our crew was so bendy, he resembled a drunk Mr Soft. I was only capable of screaming out words to tunes by Simple Minds at the top of my lungs - Neon Indian were a highlight but at this stage, it really felt like we were scraping the barrel of talent on offer. Particularly when their parting message was: 'Goodbye - we're just off to write our second album and change the face of modern music.' How they think they're gonna do this with their sub-U2 imitations is anyone's guess. Good luck nob 'eds...

Elsewhere supposed hype merchants failed to deliver - The Black Lips were rowdy, drink spraying fun but not life changing. But better than the Weeknd were just weak, who were just fucking week. Imagine a Nu-Metal Jamorquai and you're getting somewhere close to the horrific reality. The XX proved to be a be-witching headliner for the Saturday - but hardly the definitive rabble rousing crowd-pleaser the Porto event was crying out for to make it in anyway memorable. As one of our crew sagely noted, it's like the organisers forgot to book anyone decent with any tunes. The sit down ambient droneathon in an art gallery in town, which made up the last night of the event, was the final kick in the teeth...

So to the final day, which perhaps offered us some of the biggest highlights - with the festival over we managed to get involved in a sun-kissed crazy golf sess, then watch the descending on a multitude of bars to ingest liquor and coffee before a smokey, boozey karaoke sess. - the next day's hangover saw one of our crew hyperventilating in the taxi to the airport and whimpering the infamous lines 'I'm gonna die'. Even lads need a night off the sauce. Some times... In a nutshell we had a top time - beers and cigs are cheap. Much of the food comes bound in bread. Taxis are not as expensive as buses. Fish is readily available. You can get toasties in bars. And our flat allowed us to watch 'Paris, Texas' as it had a DVD in English in there. But by the time it got through to the end of the week, none of us were sad to see the back of Porto. MARINES. WE ARE LEAVING...