Cut Copy nicked all their ideas from...

... Flock of Seagulls. I had no idea until last week - but even Ministry of Sound appeared to know - they're now getting in on the act by handily bagging up all electronic 80s needs in one handy compilation - you can find it in your nearest supermarche next to Susan Boyle thanks to the superbrand. Depressing?

This bitch can sing

Throughout the stealthy slope into autumnal times, my skin has been almost popping with the number of fresh mixes getting underneath it. Like a witch's itchy sleeve let me tell you. Too much time on one's hands? Purleaze. There's too much fresh sounding sonic science being brewed up. I need an extra mouth to slurp up all the shit that's raining down.

Despite all the aural gratification I've been getting, there ain't nowt like Skream's Stella session with fellow dubstep man Kutz to really put a smile across one's grizzled mug.

Maybe it's the sloppiness of the whole endeavour or Skream's incessant chat - Whatevs this Rufus and Chaka Khan one in particular is an absolute monster - Big tune? The size of an elephant. Go big or go home.

This really is it... 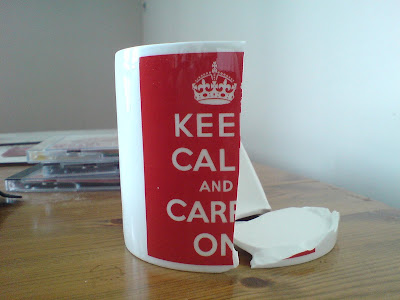 My tenure as an online sweatshop wordsmith came crashing to an end the other week. Fittingly it was almost 24 months to the very day since I went to an interview in a shit hotel in Leeds to be told that I could possibly end up writing news about platinum metals.

I laughed at the time but little did I know what the full horror would resemble. Marlowe and the inscrutable heart of darkness all come to mind.

The leaving do was on point. Astons, right in the shadow of our office, was the location. The website offers a flattering insight into a place which is as dingy as it is depressing. One can sit inside drinking becks watching pathetic bastards piss their wages up the wall thinking they're living life to the very full while spilling cocktails down their Next suits. G.R.I.M.

Perhaps predictably, we made the occasion much more euphoric by getting bang pissed. I accidentally dropped my leaving gift (the above mug) on the floor of the DLR on the return journey. The pinot grigio I received (how did my colleagues know?) is a drink best consumed when already drunk such is the fragrancy of its manky bouquet.

The chicken we wolfed down at 11pm possessed a healthy orange glow. I put it down to the all the corn it must have been brought up on. Almost too fresh.

We even managed to get Craggsy a shout out - The walking piece of protein behind the wheely deelys (who has been known to consume a pasty and chips while in the 'mix' - heroic behaviour) played Beyonce to celebrate Craig's 41st birthday. A big look for a leaving do. Bye bye now...
Beyonce - Sweet Dreams (Official Video) HQ
Uploaded by wonderful-life1989. - Music videos, artist interviews, concerts and more. 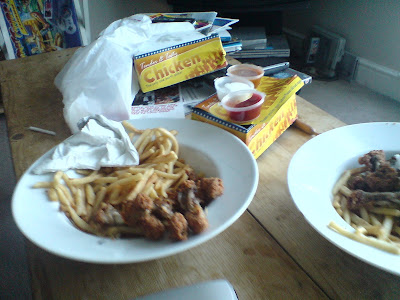 The carcasses of ten pounds worth of radioactive chicken 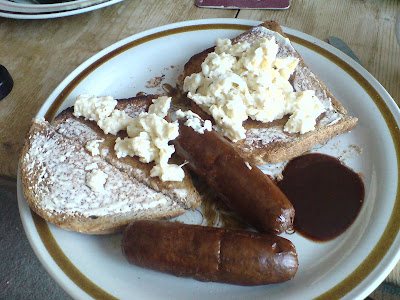 Breakfast - More chicken, this time as a sausage with reggae reggae. In. My. Face. 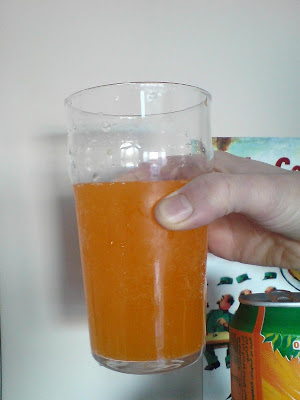 This is Mirinda - a refreshing bev with enough e-numbers to maim the throat of a small child
Posted by Jimio at 13:44 No comments: