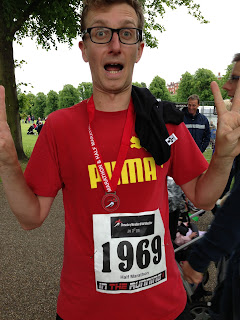 Running doesn't seem like a very dreamy act. But when you're on the canter, there's a certain amount of soul searching with every step. And the longer you go, the deeper it gets. Eek. Some writers have documented it - like Haruki Murakami and his tome What I Talk About When I Talk About Running  or The Loneliness of the Long Distance Runner by Alan Sillitoe are like real intellectual works about the nuts and bolts of getting a wriggle on.

In keeping with these great motivators, my main preoccupations while trotting about have included Macdonald cheeseburgers, kebabs, pints of Kronenburg and cigarettes - plus the extistential meanderings of where are those football socks. Where are they?

Indeed it was the thought of a pint and a fry up which kept me mentally meandering while taking on the glamour and the glitz of the Shrewsbury Half Marathon.

We made it in time on the Sunday to binge on bananas before running around this very grotty place for less than two hours in the pissing down rain. Vibes. Greasy eggs and beer have never tasted so sweet...