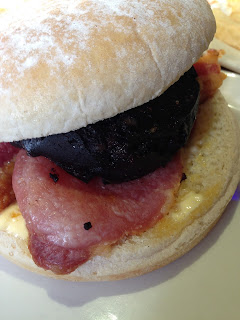 We flew to Scotland last month for a weekend of rural treat and retreats. As you might imagine, it was a very salubrious couple of days involving country walks, kippage, scran and many bevs. However, we did find time to squeeze in a bacon and black pudding butty so that knocked a few points off the smug, worthy weekend-ometer'...

One in the gob 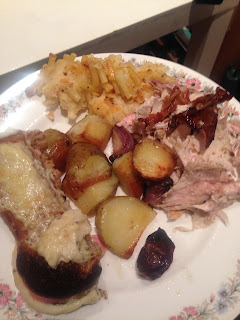 We're gluttons in our gaff and and had the pleasure of noshing on this the other night. What is it I hear you cry? Pork, roast potatoes, macaroni cheese and a cheese toastie on the side. Delicious...
Posted by Jimio at 14:32 No comments: 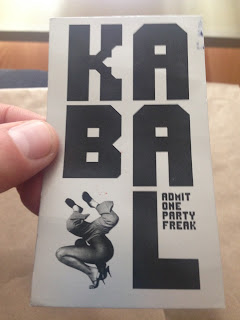 Returning to South Yorks is always jokes but our recent jaunt up the backbone of the country to Sheffield was a total stonker. Our journey was made to take part in the 49th and penultimate ever night of Kabal but while the night itself was total class, the rest of our frolics were equally as vibes-filled.

We landed on the Friday lunchtime after a very beige, scran-filled train ride. We mooched around the city centre before meeting our Air BnB host, the laconic and possibly stoned Nathan. He was a very unenthusiastic individual who turned up on Sunday morning to kick us out on a hoverboard. None of us had had much sleep so we took it in turns to try and mount/fall off his board while baiting him for not raving as hard as we had at Kabal the previous night (we found him lurking in the shadows of the club).

Our first evening in South Yorks involved drinking pints at normal prices (fuck you London) and eating some poncy sushi before heading home for a bluetooth speaker boogie in the kitchen.

Saturday was more jokes, consisting of a trip to the countryside to search for magic mushrooms. Turns out the hills above Sheffield are stuffed with millions of different strains of the wee blighters but only a handful have the hallucinogenic properties we were after. As a result, our afternoon was spent staring at the ground looking for the type of 'fun guys' which possess a 'nipple'and 'bruise blue'. After finding about 12 we retired to a local boozer where a medieval re-enactment event was taking place. Serious. Weird vibes a plenty.

Kabal itself was a winner - the Night Kitchen is a sprawling network of studios and rooms with vibes going on across every area. Downstairs was amazing, featuring throbbing electronics from the likes of Dino Thompson and Scott Monkz while up stairs was full of aural darkness, bass and jungle. Serocee brought the dancehall noise before Toddla delivered a load of hype among the jingles. It was Pipes and Winston Hazel who saw us through to the close with maximum beggaring on our part. We went home for a few more morning cans, then hit the hay briefly before getting up and spitting ourselves out into the nearest boozer. Here were the scenes of some great unraveling until it was home time. Well done Sheffield - that was a winner...