After having recently given Lady Chann a mild grilling for the Stool Pigeon, we attended her video shoot on the roof of a pub in Kings Cross.

The shoot was a pretty cheap do for her new single (and first release on Toddla T's new Girl's Music label) Sticky Situation. It featured the likes of Toddla and Skream miming dancing on the roof top to a tape of the tune being farted out of a little ghettoblaster. Dancing to silence is fucking difficult so we had to embibe a few bevs and doobs to get us in the mood.

This sort of behaviour resulted in myself being too doped up to locate the toilet and giving up the video shoot in favour of a trip to the chicken shop. Your classic tireless levels of professionalism on display. It also meant we got to have a little chat with Skream ('oooh I love your mixing mate. Oooh. Do you want a beer mate. Yes mate. Oh you've gone mate...')

Here is the Lady Chann interview for yoursens.
Posted by Jimio at 13:37 No comments:

Spent most of last week construing summat on this. Herbert's new album One One is a weird solo venture for the man with the big brains and big ideas. I cobbed summat out for Resident Advisor... Check out my vibes down here...

One One review
Posted by Jimio at 14:48 No comments: 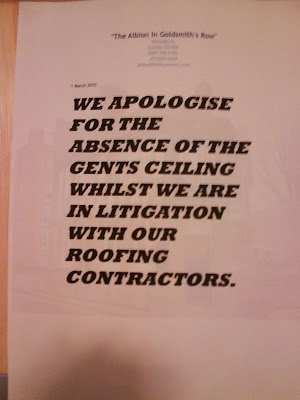 April has been bingey. Well bingey. No surprises there then. Bike rides and biftas, peacocking and snoozing. Last night's dancehall party in Brixton was one of the best. South Rakkas Crew and MC Serocee killed it. Then we got locked into the after party vibe with the emcees and dished out verbal beef to Serocee about his choice of wheels. Vectra vibes. Here's a few images which my phone camera has caught. It's been nice out. 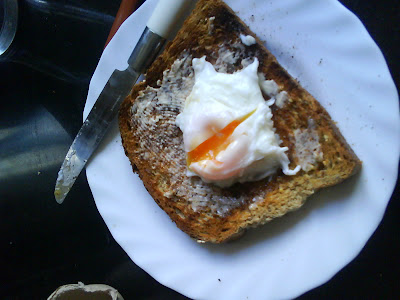 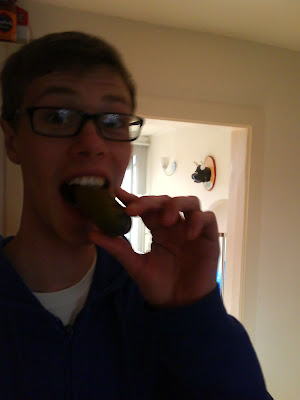 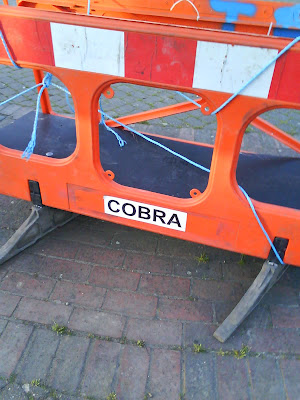 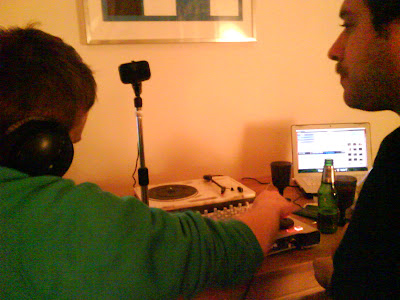 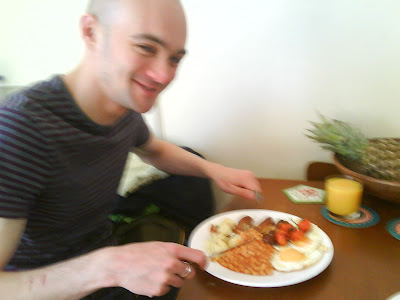 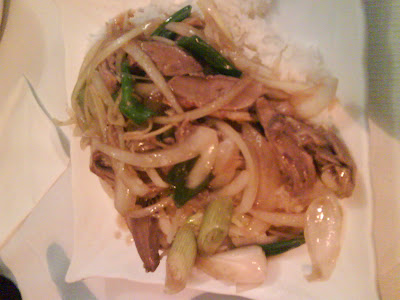 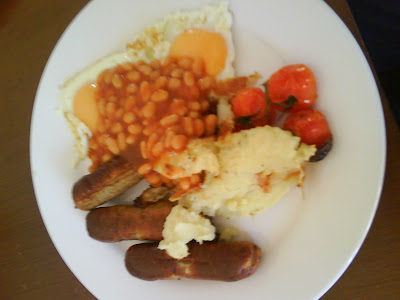 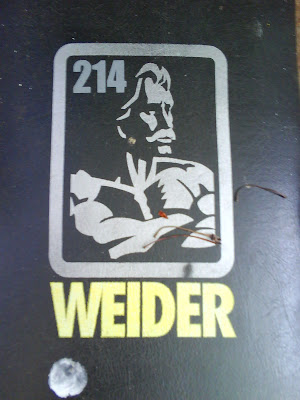 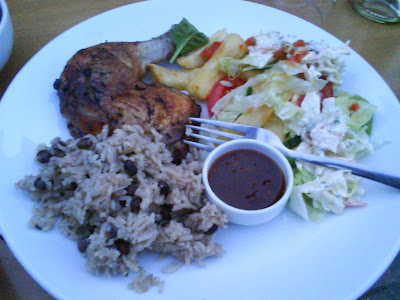 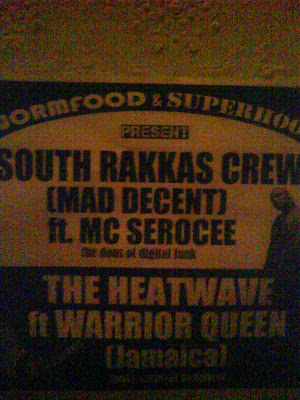 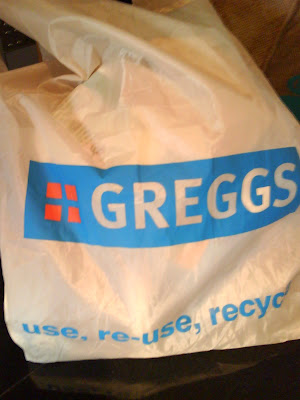 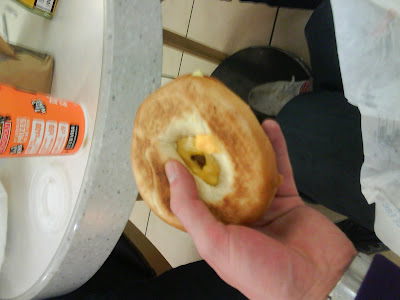 Macdonals push a mean bagel at 6am on a Sunday morning 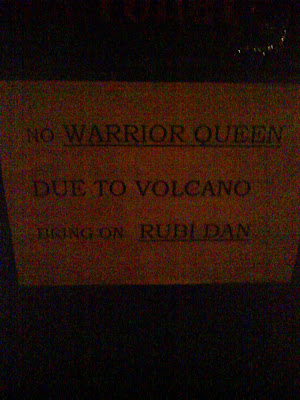 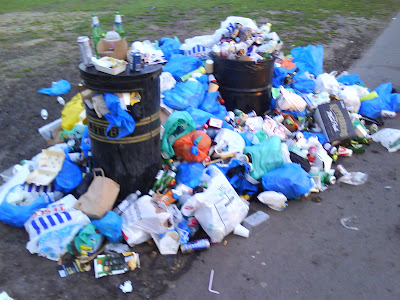 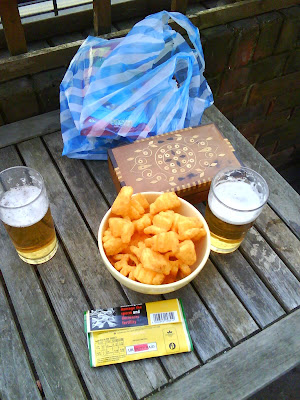 A simple picnic
Posted by Jimio at 06:18 No comments:

An April night in...

While nights out have been getting more frequent, nights in have also been speeding up - subsequently home listening has been high on the agenda. In a fit of real laziness (posting videos of music is right lazy) here's a few tunes which have been keeping me up and locked in over the last few weeks. All of them big although whether collectively they'd provide a stonking enough rhythm for a Bar Mitzvah is a moot point...

New Matthew Herbert with the man singing for the first time. Apparently he had to get pissed to on claret to do it - result? He's got a beard, eye liner and singing about hitting the town with 'a little bag of sparks'. Saucey low key electronic business

Been hammering this for two weeks since I heard the 2 Bears rinsing it on their Ministry of Sound show. Hi-NRG, lovelorn, insanely camp, New Order sampled it - it tucks on the heart strings and gets you in the gut.

On hearing the name Yeasayer I imagined ATP-levels of noodling whimsy. Turns out this is amazing and a pretty positive vibe at its hub. Jesus. I'm turning into a fucking tree hugger. Maybe it's my time of the month...
Posted by Jimio at 14:57 No comments: 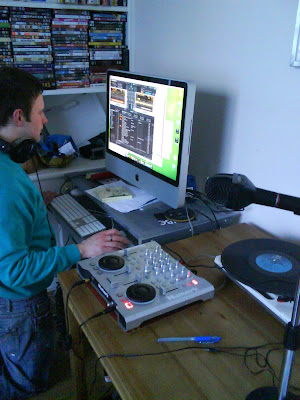 Over the bank holiday weekened I either did the following activity or was at least in the same room as when the activity in question was taking place. Pretty fascinating shit I think you'll find... Here we go...

P.s Picture below is of this bell end on the tube. He was stood with his bottom in an elevated position. Just like he had a pole up his arse. 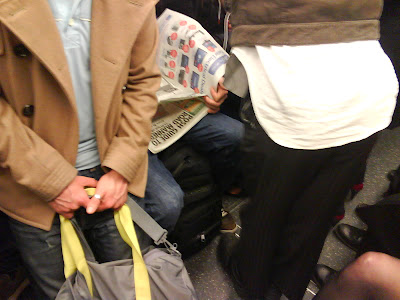 The other Saturday was a night where we stuck a toe inside the notion of 'party' in its rawest and rudest form. Thankfully it didn't come out covered in sick or with a fist wrapped round it. Just a little bit more vacant than usual.

Tings kicked off in Brixton at the Bring It night, lorded over by DFA/Horse Meat Disco affiliate Felix Dickinson. His shizzle is top notch business make no mistake. If you like your disco a little bit cosmic, a little bit dubby and deeply whacked out on feminax then this should be right up your alleyway.

Check out his soundcloud mixes on here - and his own website over here. Almost too strong...

The business went down in the seedy environs of Medusa's - a suitably dark lair to ingest toxins and throw your hands up in the air. Smoking inside was frowned upon as we found to our detriment. But pretty much anything else goes. Chatting total bullshit to strangers is encouraged. As is drinking and wandering round with your hood up baying at the massive glitter ball tottering above the dancefloor. Standard. The Idjut Boys joined Dickers on the decks and kept it well dark and druggy on the house business until it was suddenly no longer dark and most of the drugs had gone. Whoops.

At 6ish on a Sunday morning there are obviously places you can go to really gild the lily and take the edge off. If indeed, any edge is left. Beyond at Area is definitely one of said places. If you're in the mood to pop another sudofen, sit on another man's hand and dance with dudes sans tops then this is the place for youse.

This video captures the vibe like the proverbial nail on the head...

After a taxi ride (MPV natch), we queued for over an hour to get in with some Welsh dudes. They'd already been in the queue once but the club night changes over at about 5. So they got kicked out into the real world. Rather than calling a halt to proceedings, they'd opted to take a hammer to it and get back inside. And why not? When a Manc tranny wearing a crown with 'pervert' daubed all over it is in charge of queue, it really isn't time to go home. Is it?

My favourite bit (other than the overpriced pints and sucking on tabs outside in the sunshine) was in the main room. The green lazers were whizz, whazz whooing a la Star Wars and the sweat was coming off the gents dancing next to us so thickly you could almost eat it. To top it off a massive black dude in white hot pants and a blonde wig was dry humping the air on the stage to a very hard, house soundtrack. I have never seen the like.

Plus the walk home at ten am past up Whitehall and past Downing Street boosted the number of tourist attractions I've clocked in the smoke by approximately ten. The ying and the yang.
Posted by Jimio at 14:47 No comments:

I done a little review of the 12x12 night we murked ourselves at the other week.

It was an evening of both high amusement and total bullshit in equal measure. It also made me feel an inverted smugness about not being an employee of the music industry.