Choose life - choose getting out of the bed in the morning 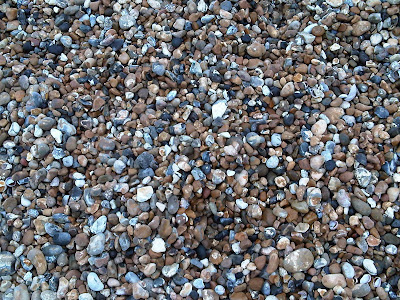 The majority of Saturdays usually start late amidst a fuggy haze of mild paranoia and no little regret. And, no matter how much shit food one stuffs down one's cakehole, this doesn't disperse until the liquid horse is found and remounted. It's a vicious circle akin to playing chicken with your own brain and self rather than a car. It invariably culminates in making a number of Monday night promises all beaming with good intention. And equally as invariably these positive vibes will have the smiles wiped off their faces by Wednesday, then be smashed up like a tray of pint pots over someone's head. Fuck it. Rules, especially ones you've set yourself, are there to be broken...

But, against all the odds, and markedly out of kilter with the recent vibe, last Saturday just past was very different - Sure we didn't hit the hay until about 5 on the Saturday in the am (which was very in character with recent behavioural traits) but the morning was clocked and by the early afternoon, we were off to Brighton. Unbelieveable.

The day was big - There were some real culinary high points both on the journey to and while mooching round the seaside itself. The scotch eggs, the cheese toastie (served by a peculiar Scotch chap in non-matching crocs - a statement?) and the gourmet burger kitchen were all big looks. We threw stones in the sea, saw a photo exhibition and sneered at some of the smug faces sitting about guffawing. So thankfully, and as karma dictates, there were also some moments of proper fear to balance the enjoyable bits of the jaunt out.

Wise know-it-alls suggest that confronting summat that truly terrifies you is the best approach to getting over it. So, having taken this mantra to heart, I've been getting on roller coasters for time. This is despite being a big, fat wuss when it comes to heights. I don't wimper at the sight of a step ladder but have been known to not peer over the edge of a wall when confronted with a mild drop.

So boarding the roller coaster at the end of Brighton's pier was another attempt to prove mysen to mysen. And, as with previous endeavours, it didn't work. I was shaking like a puny, vein-ridden leaf by the time it'd finished with us. And I kept my stupid eyes tightly locked for the entire journey. The rust, the proximity of the sea and the loose fitting belt thing all zapped my confidence. It wasn't until we'd found a pub that the equilibrium had been restored. The moral of the story? It's good to do something you don't know. But it's nice to know what you know. You know? 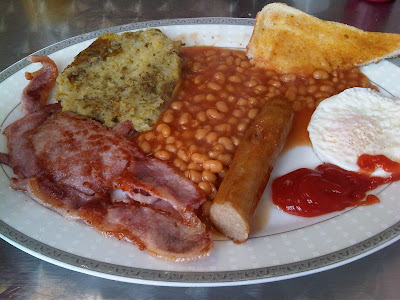 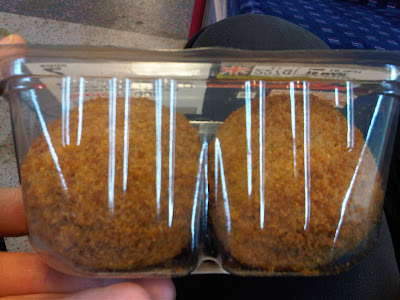 Sobering up next to a right pair 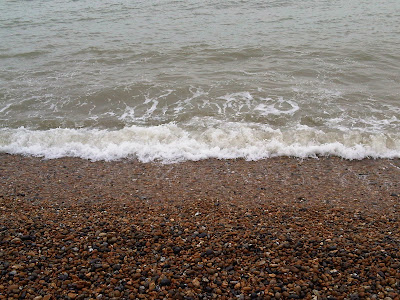 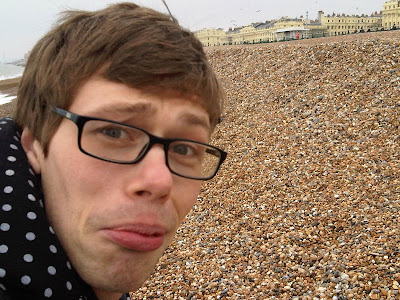 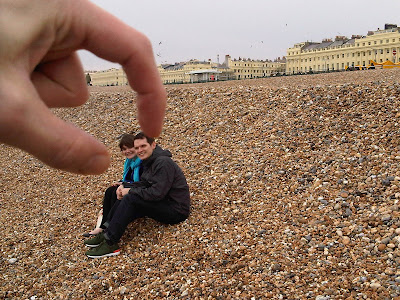 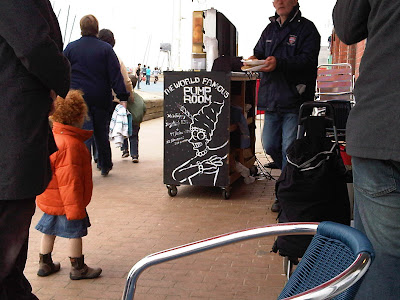 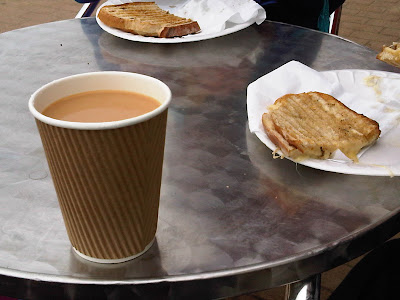 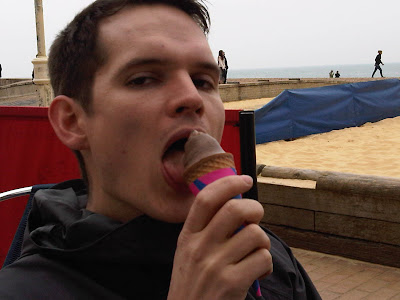 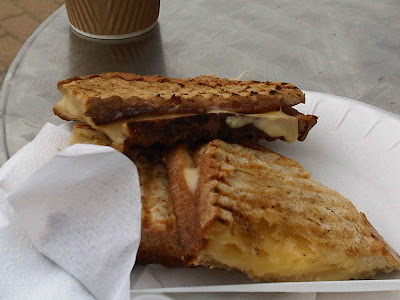 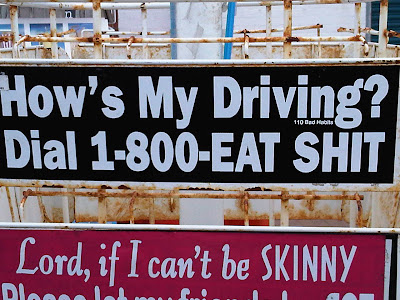 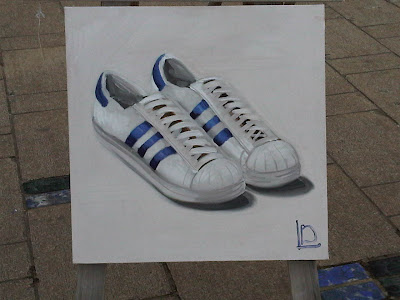 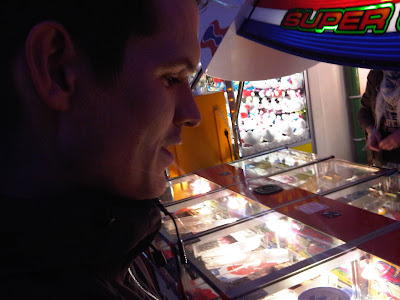 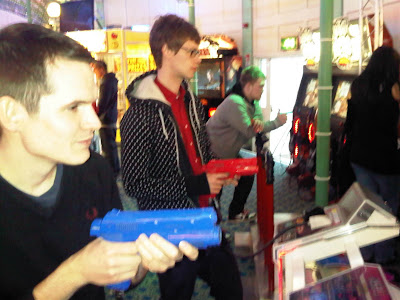 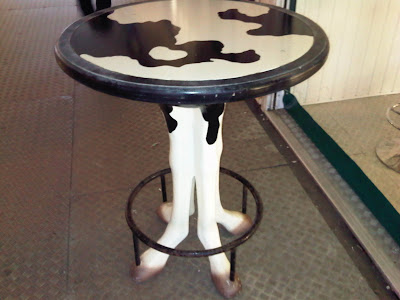 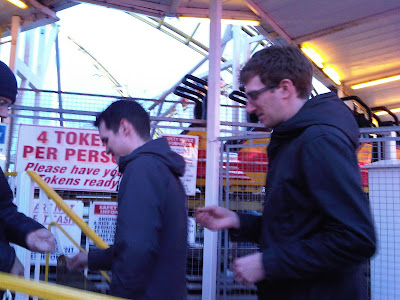 Shit scared and in the queue for the roller coaster 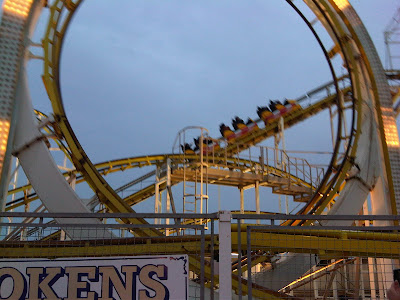 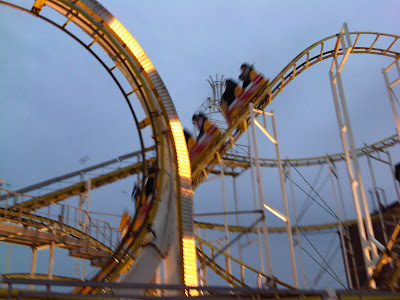 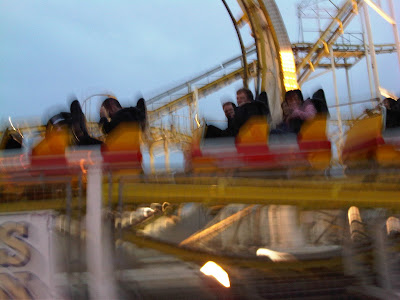 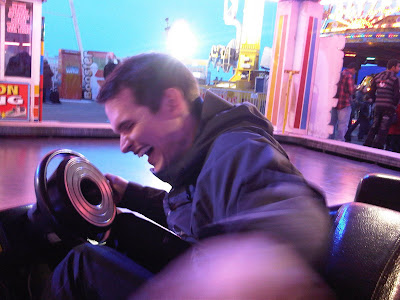 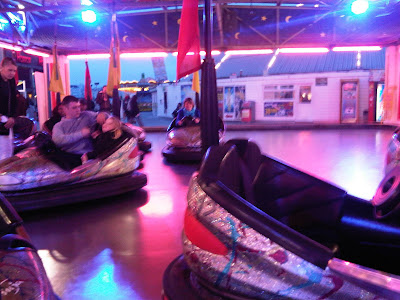 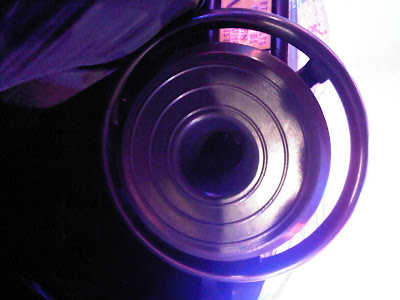 At the wheel
Posted by Jimio at 14:11 No comments: