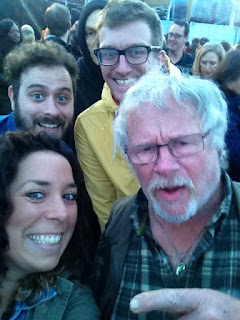 Never before has the mortality of pop music been under such stress as it has in 2016 with the passing of David Bowie and now the purple one, Prince.

With the sadness of his untimely death, it's also meant his music has been inescapable and there's been, what the papers always describe as, an 'outpouring' of grief from celebrities both big and small. One of his oddest fans is perhaps original birdman, Bill Oddie who we bumped into in the queue for one of Prince's Roundhouse gigs back in 2014. Tickets were 85 quid each and it's probably the best 85 quid we have ever spent. RIP Prince. Check out this fucking amazing mix of his music below.