Earlier up inside the year I was asked to review the Levon Vincent Fabric session for those blighters at Hyponik. Deepish house ain't totally my bag so, being (and still am computerless), the review took some time to churn out. And then the words never did see the light of day - so here they are in their entirety. Lucky youse innit...

House, house and even more fucking house - the words originally made up the tagline of revered dance music magazine Faith. But this lairy marketing speak is also an apt way of describing the electronic pedigree of esteemed DJ and producer Levon Vincent. House music? He’s steeped in the stuff…

For those unaware (or who missed his recent mesmerising set in the Boiler Room) Vincent is a New York-now Berlin-based house head. More importantly, he’s a man with a thorough schooling in the digital bricks and mortar which make up 4x4 tech movements. Since the mid-eighties, he’s been burrowing through the digital underground crafting music, working in record shops (NYC’s much-loved Halcyon) and releasing great records (‘Late Night Jam’ and ‘Games Dub’ to name but two). This latest Fabric session is Vincent sticking his head into the relative commercial sunshine following years of dedicated subterranean toiling.

So how does the man tackle his first commercial mix? Rather than the Shackleton or Omar S approach of ram-jamming the tracklist with his own work, Vincent opts for more sporadic, personal inclusions - but the seven rhythms borne from his fingers are among the most satisfying moments in the set. The rest of the music comes mainly from his New Yorkan contemporaries - Joey Anderson, DJ Jus-Ed and DJ QU all feature.

Vincent’s focus here is locked on ‘groove’ rather than creating extreme dancefloor explosions - and many of the tunes on this vinyl-only set are allowed the rare luxury of stretching to their fullest. Joey Anderon’s ‘Earth Calling’ begins the affair with a disjointed, glowering piano before the pistons and hi-hats of DJ Jus-Ed’s Blaze kick in and the ebb and flow of the 75-minutes begins - it’s much like an electronic tide flirting with a sea shore, which on first listen can be a disorientating experience. But there are some serious moments - Vincent’s Polar Bear brings some real bite to the previous ethereal electronic flutters. Anthony Parasole’s Tyson ducks and dives as nimbly as the boxer of the same name before he resorted to nibbling on ears.

But it’s Vincent himself who serves up one of freshest slabs of aural magic - Rainstorm II is a crisp bit of cosmic machine funk which sees the mix depart its rhythmical moorings and enter a whole new galaxy. The production’s mechanical slap bass is relentless amid the electronic swirl - and it’s one of the finest, rushiest moments on here.

With recent Fabric-endorsements including Vision Quest, DJ Sneak and Digital Soundboy, Vincent’s set is a more than worthy addition to their ongoing mission to act as a platform for underground talent. His mix isn’t showy - instead relying on drawn-out grooves rather than bombast to bring the wobble. However, once it sucks you in, it sticks to your inner ear like a limpet. This memorable session is really difficult to let go… 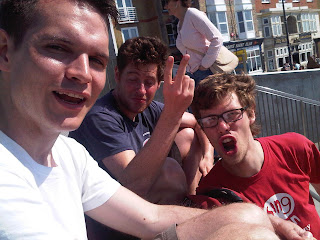 Even lads like to take little sea-side jaunts to pastures new and old. When you're constantly nailing lager and acting like a massive man, you need to take a little time out. We did it in Faversham. The word we continually came back to was idyllic...