Summer 2016 has been a hot one and for such occasions, a suitable soundtrack is required. So here's what been keeping our walls reverberating during July and August while we've been sipping on gin and juice ... 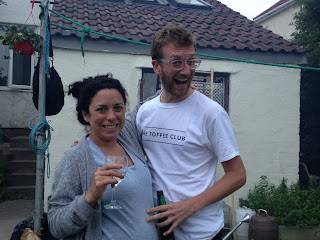 In Brizzle do what brizzlionians do which on our latest jaunt involved kipping on our mate's floor, BBQing chicken and setting light to a big dock off fire in his garden. Oh yes. For this is the land of the free, where cab drivers have sub woofers in the boots of their vehicles, kids can run around bare foot and dancehall gets blasted out of the back of hot hatches at a bottom shaking volume. Brizzle me nizzle! 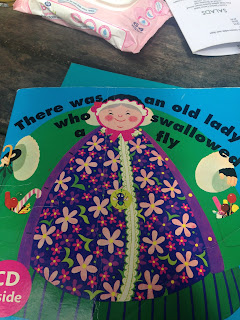 Have you ever drunk red wine from Walla Walla in the pale moonlight? 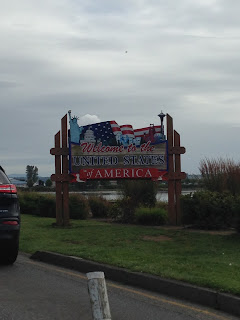 Have you ever quaffed the best red wine Walla Walla has to offer? Have you ever troffed so much Ranch Dressing that your face takes on its mayo and herb like consistency? Have you ever slept rough under a truck in a car park?

After our recent jaunt to the USA, half of the four of our travelling party could answer 'yes' to all three of the above. These achievements were thanks to some erudite planning earlier in the year, which meant we managed to be in the United States for 4th July, a bizarre, deeply American splurge of strange, stodgy, yet delicious foods, much patriotic chest beating and shouting around of the word 'freedom'.

Our trip, like all good ones should, began in a pub at London Gatwick airport via a cocktail of breakfast pints and pain killers. Oh yes. It meant that the nine hour flight passed in the hazy blink of a heavily lidded eye, interspersing sweaty sleep with watching (and promptly forgetting) blockbuster films. Before we knew it, we'd landed and were doing the zombie shuffle around Vancouver's airport attempting to wake up and force our four bulging cases into a Nissan hire car. After much pushing, we eventually found one we could squeeze our garms into and we were off - the road trip, in a practical family saloon with an efficient ratio of miles to the gallon, had begun. 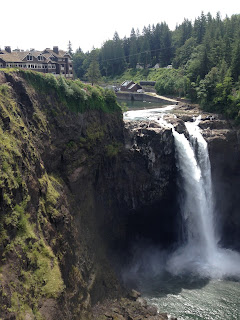 Night one was spent in the Salish Lodge near Snoqualimie Falls - this oasis of peace and delightful wooden scents was the location for the filming of the opening sequence of cult series Twin Peaks so provided a suitably ominous opening to our jaunt. We never bumped into Bob or found the Log Lady. But it did make for much surrealism, enhanced by high levels of sleep deprivation and a typically unfriendly welcome on the US border from security. We witnessed one poor unfortunate get hand cuffed and carted away, so, despite the bad vibes, we kept a lid on it, denied everything and they let us in. 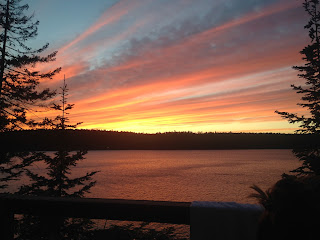 Day two was spent driving across country in the baking heat to Hayden Lake and a lovely family lake house for the holiday celebrations. The drive from there to the holiday destination, in deepest Idaho, is a boring one with little to look at except for flat fields and truck stops. So it was with some relief that we made it to the lake house and a very warm welcome with the in-laws we were staying with. From that point, it was full immersion in the American dream and the 4 July celebrations - we swam in the lake, enjoyed some serious sun bathing action, partook of numerous IPAs including this beaut from the New Belgian brewery and ate some, at times, bizarre scran where sweet and savoury items - rather than kept at arm's length, are encouraged to mate. 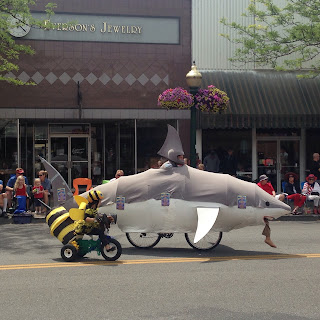 On the 4 July itself we went into nearby town Coeur D'Alene to witness their parade full of Donald Trump fans, old people in costumes (including one keen OAP dressed as a shark riding a bike) and roller skating Napoleon Dynamites. We topped it off with a Gooey, a dessert as big as a baby. Our server, Brandy, was amazed that we were from 'Engerlandddddd' and talked much of the US gun laws, how many she had and how much heat people would be packing in the restaurant. We shut up, ate our Gooey and left after giving her a fat tip. She was promising to come to visit the UK at some point. Looking forward to it Brandy. 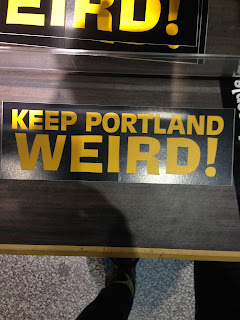 The next stop on our tour was Portland. Which seemed close on the map, but in reality was nine hours of driving away. Nine hours, it turns out, is quite a long time to be trapped in a car with your buddies, a box of donuts, a large hangover and a bottomless bag of pretzels. Reaching the brilliantly named Bozo Burger was peak. The other bits aren’t worth talking about ever again.

We’ve been to Portland previously and always had an absolute belter, so this time was just as Balearic once we’d recovered from the journey and could bare to stomach each other again. We drank smoothies, did yoga, visited Nike’s Oregon HQ, ate from street carts and got lost in Powell’s, the US of A’s biggest independent gift shop, ate a shit load of turnips and saw the best sign ever. We also spent a fair amount of time in hype new football boozer, The Toffee Club watching football, listening to rave as well as visiting Farma, the legal dope smoking joint up the road. We partook of a point five of a g of the so-called hazy kush and dog walker from the expert seller inside the shop. Rather than a seedy, underhand kind of affair, this was sanitised, shiny white and glistening with the sort of customer service John Lewis would die for. They even sold t-shirts in there. Take note Amsterdam. 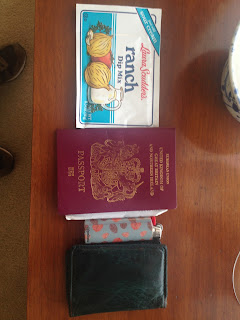 Seattle was our next calling point, a mere three hours up the road from Portland, all in one straight line north up the coast of the country. Known for grunge and plaid in equal measure, our first night was spent ignoring any culture vibes and instead focused on sampling the kush and the dog walker. Our expert back in PDX had advised us that the former was for ‘going out and doing shit, like museums’ while the latter was to be imbibed if you wanted to relax. As nice as he was, I strongly disagreed with his prognosis, being totally unable to talk or move following a hit of the kush. It was a deep burn no doubt.

Our days were spent traversing the touristy bits while the evenings in the bars of Ballard, playing shoot ‘em ups and drinking strong IPAs. Tourism involved the Space Needle, one of Seattle’s most iconic land marks, a Jetson’s like structure impaling the sky from its central location. For less than 30 bucks, we went up it in the lift and enjoyed/endured shitting ourselves at the top, looking down on a city where the people resembled ants and our collective death drives were doing some serious over time. 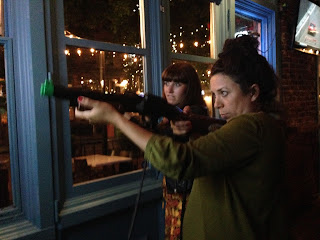 The final stop on our jaunt was Vancouver, a Canadian city a good few hours jaunt up from Seattle. We queued all the way into the city, with one of our party dry heaving into a plastic bag all the way there. Hi-jinks. When we got to the Air BNB, there also appeared to be a cycle race going on outside the front door meaning we had to drive around the nearby road East Hastings. East Hastings is mainly noticeable for the huge number of homeless folk, drunks and drug heads marauding around the streets. Our flat backed onto a car park with a great view of the Vancouver’s favourite Country Pub, a really, really, really skutty boozer we threatened to go into but didn’t get chance. Instead of potentially risking our lives, fraternising with smack heads we instead chose to again test our fear of heights by journeying up to the Capilano suspension bridge, a very wobbly wooden bridge standing proud at a height of 70 metres. We didn’t as much walk over it as totter but we managed it nonetheless. Our final evening was spent eating sushi and playing board games with fake, made up names before we woke up hungover the next day and dragged our weary selves to the airport with tears in our eyes. Proper boo hoo. Props to the four man crew, as well as all those who put us up and those who put up with us. Let's do it again soon...