In London Fields no one can hear you scream 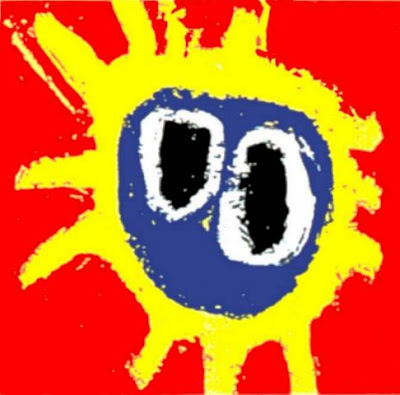 Call me an ugly, old cynic but it seems that all creatives currently have some clause in their personal contracts allowing them to revisit the behaviour of their selves from 20 years ago, then rehash this output all in the name of raising some (probably much-needed) cash. Belts are tight, talk is cuts, hair is grey, moobs pronounced and even aging rock dudes need to make a living. Usually it's a total crock of horse shit but in the case of Screamdelica, the pre-rave album put together by Primal Scream and Lord Sabre Andrew Weatherall tings are different. The album is proper big and helped create dance music as we now know it. So you don't begrudge them too much their decision to recreate Screamdelica in the flesh.

Their gig at the Olympia was big and reflected the physicality of much of the majority of the Scream and their audience - everyone was looking slightly more saggy with only Bobby G resilient to the wind of change. He may have a pair of kids named Wolf and Lux but he's slighter than a pencil and dances like an absolute flower. No moobs on this mon.

G-man and his motley Scottish crue rattled through some of their hits before returning to don jet packs and fly through the more technicolour dub of Screamdelica, complete with backing choir and big boxes of electronic primordial soup. It was loud, euphoric and at times, a little bit ropey. Mani gurned his way through the entire show and they forgot how to play Rocks but it was still a massive gig. Plus the space was so big you could get away with smoking inside without any fear of getting caught.

One of the big bits to their comeback is the new appraisal of Weatherall - Everyone's suggesting he should be the next Peel which is nuts for a chap who can't remember much of the late nineties and early 2000s due to the amount of stimos he was on...

His latest 6music show which takes a peek at the influences behind Screamdelica is part of the reason why... 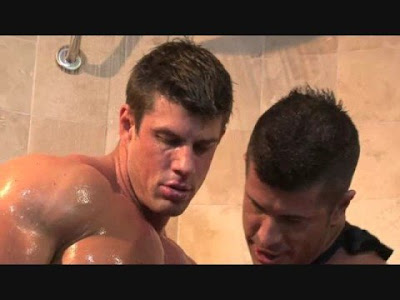 Weekends before and since Kiss the Fist, our erratic and irregular little evening of electronic business, have been characterised by regular bouts of sleeping in the wrong place. I'm not currently sure whether being pissed all the time constitutes being able to pin the tail of blame on a narcoleptic donkey or not. Probably not, but it has certainly been a crucial factor in losing a large amount of dignity, money as well as two phones and a bag of promo cds. Whoops? Whoops indeed.

Kiss the Fist itself was a pretty big look - We'd set the bar of brilliance pretty high with previous behaviour in the boozer - The word 'Cuntz' was bandied about in relation to certain members of the clientele during the last one - while only the previous weekend I'd taken it upon myself to forewarn the staff in the pub of what might happen by nodding off on a stool. And being unwakeable. You don't see Tiesto doing this. Do you?

The night itself could never succeed in the same way in terms of pure, unadulterated Corrie-style drama. But we had nuff tunes to show the handful of punters in there who was boss. And when that handful may or may not have include a Catherine Keener lookalike and How Clean is Your House 'star' Aggie MacKenzie then you know the audience needs to be judged on quality. Not quantity.

It ended somewhat predictably by nodding off following a blast of 'rave gravel' in a studio somewhere in the heart of Aldgate East. I grabbed 40 fitful winks while drooling on myself in a room full of fun time guys. And slipped down some stairs bruising my arse and tail bone. Plus operation reclaim hat and records from there is currently filed as 'ongoing'. So the night itself was a great success. 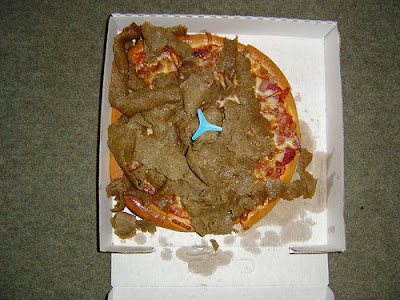 As part of our 'promotion' for the evening, we put together a little podcast of the sort of musical tackle currently floating the collective boat. One of the main talking points was the 15 inch donner meat pizza we took down as creative fuel. The one above is much rougher than the one we ate (the images were on me lost blower). It was almost too nice?

You can stream the podcast here