Although we don't usually fall for Netflix binges, this latest series - Stranger Things - had us hooked by the short and curlies with its John Carpenter-esque soundtrack, scary monsters and numerous homages to the Goonies, Stand By Me and Stephen King. The music is well ace and DJ Yoda has put together this sublime mixtape capturing, then distilling some of that raw eighties essence. Fingers crossed for season two to come soon and not be shit. Please.

Come with us down the Glastonbury rabbit hole... 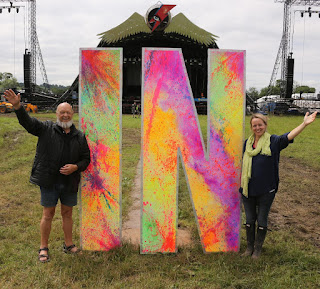 Mud, mud and more fucking mud - that was the mantra for this year's Glastonbury Festival. We landed on Thursday and right from the get go, we were up to our eyeballs in it, which made for a fucking slog make no mistake. But despite that, and the EU shitstorm going on all about us, the vibes were raw, pure and remarkably similar in stench to room odouriser.

The first day was all about going hard thanks to Steve Davis at the Stonebridge bar and Mura Masa in Silver Hayes whose slippery electronica we caught from a fuzzy distance. After we beggared around until passing out in a tent in a smokey haze. It meant we suffered extreme hardship the following morning with the fug of 'brexit' hanging over the whole site like a toxic fart. Despite these bad vibes, rather than putting a downer on proceedings, it meant we redoubled our efforts to go harder than ever.

Thankfully, while the bleak political winter raged outside the festival site, there was plenty of ace music to enjoy - Roisin Murphy, with her hybrid of outlandish outfits and electronics wowed on the Friday, while the NYC Downlow was also popping with Roger Sanchez and Honey Soundsystem totally on it. Saturday was focused on Tame Impala, then New Order and their disappointing set, which LCD Soundsystem counteracted on the Sunday with two hours of musical magic. With plenty of cowbell and disco drums, their performance was something else and catapulted us through the night until our train the following Monday morning. We were back in Dalston for about ten am in time for a Gregg's chicken bake and a lie down for the rest of the day in front of Twin Peaks. Hats off to all who repped. Boo and hiss to all those who voted us out. You need to remember that, much like in the peaks, the only thing to fear is fear itself.