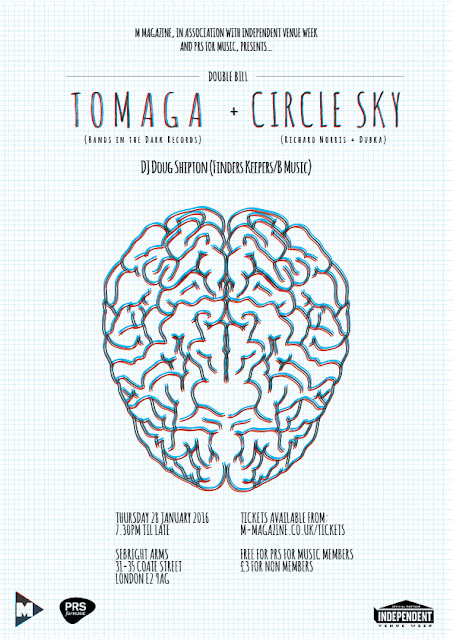 So it's that time of year again when our work are doing a gig - and this one should be a stonker with Richard Norris and his new live analogue electronic outfit, Circle Sky.

Here's the blurb and tap us up for tickets...its next Thursday 28 January...

We are excited to announce that Tomaga (Hands in the Dark Records) and Circle Sky (Richard Norris and Dubka) will co-headline our M magazine night at The Sebright Arms, London, on Thursday 28 January 2016, in celebration of Independent Venue Week.

They will be joined by the inimitable record hound DJ Doug Shipton (Finders Keepers/B Music), who will be spinning delectable tunes throughout the night.

Tomaga are Tom Relleen and Valentina Magaletti - a pair of sonic voyagers whose unfettered musical explorations have led them to exciting new territories that loosely incorporate jazz, electronic and psych.

They also make up the rhythm section of psych-rock trio The Oscillation, and between them have played in countless other bands including Neon Neon, Raime, Shit and Shine and Voice of the Seven Thunders – all of which helps inform their unique sound.

We’re really chuffed to have them play at The Sebright Arms to debut their brand new live set. The show follows a brilliant year of mind-blowing sold-out gigs and their critically acclaimed sophomore album Familiar Obstacles.

Circle Sky is the exciting new electronic project from Richard Norris and Martin Dubka. Both have impeccable bleep-heavy CVs; Richard is best known for his work as The Grid and with likeminded music obsessive Erol Alkan as Beyond the Wizard’s Sleeve.

Fellow synth addict Martin Dubka was a member of Kitsune-signed band Cazals but is now more notorious as a knob twister par excellence, tearing up many an East End dancefloor with his acid-drenched machine funk.

The duo are now making beautiful electronic music together as Circle Sky. With 30 tracks already recorded and a huge 2016 on the cards, their gig at The Sebright Arms will be their debut. Expect a live modular meltdown and synth heavy audiovisual assault on the senses.

We’re excited. You should be too.

Tickets are £3 in advance, available from http://bit.ly/1JtRN0R

PRS for Music members can get free entry – apply for your promo code at http://www.m-magazine.co.uk/tickets

Places are strictly limited and are issued on a first-come, first-served basis.

Strung out on lasers

Well, well 2016 has been a weird year so far, characterised pretty much by death with the likes of Motorhead's Lemmy, actor Alan Rickman and of course David Bowie being taken.

There's been the usual weird out pourings on social media, in the papers and basically fucking everywhere. It adds up to an almost deafening noise, so loud you almost miss the music. So. Enough talk. Dig into this wicked Bowie mix from Optimo...


Strung out on lasers and slash back blazers Bowie mix by JD Twitch by Jd_Twitch on Mixcloud
Posted by Jimio at 07:39 No comments: