How I learned to stop worrying and make scotch eggs (again) 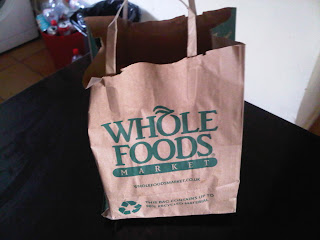 Yowzer - It's April already and circles have been turning through these here pages - Classic long time since last update but here we go with a whole sheaf of business to see you through until the sun starts shining again...

Sooooo... back in March we took it upon ourselves to once again make a sacrifice on the altar of savoury snacks and see if eggs could be scotched in a domestic scenario. Although I'd attempted such an operation back in the '011, this time the process was made slightly trickier with a cooking partner on a lent-based abstinence from certain food stuffs. Excitingly, our collective dietary requirements meant we had to enter Whole Foods in Stoke Newington to source some of the necessaries.

And, perhaps surprisingly, it was a piece of cake to acquire the appropriately concocted sausages and flour - we emerged from the eatery brandishing a paper bag after half an hour feeling pretty fucking victorious. It was only being the target of a scolding from a staff member due to our lust for the free samples of organic chocolate which could detract from our status as a pair of smug twerps. And even then, not by much. Have you ever been in Whole Foods? Even the toilets are to die for...

We hot-footed it back to ours and prepared the scotched mobile - boil yer eggs, mash up your sausage meat, roll them into dock off balls, smother in flour, egg yolk and bread crumbs, then lather up with chilli sauce and whang 'em into a lo-fi deep fat frying implement (aka a pan with a shitload of oil in).

Although the preparation takes a about an hour, cooking is done inside ten minutes - so our scotched ladies were sitting pretty like a batch of gourmet, savoury Ferrero Rocher. Some of the thicker ones were a little underdone (aka raw) so could have probably done with a little more boiling in the hot tub, but some sensible scraping and nibbling meant we could enjoy without risk of food poisoning. I had a dodgy 5 minutes where I though something evil was occurring within my guts, but after that fine. A great success if you will. If only the ambassador's reception was actually like this. Then, and only then, would I give a fig about attending... 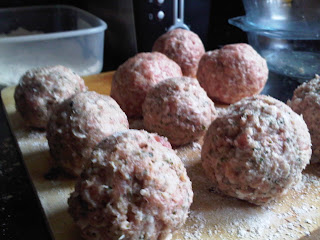 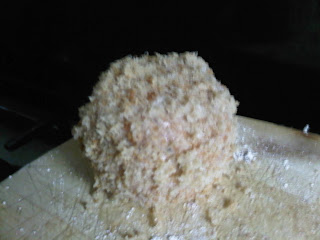 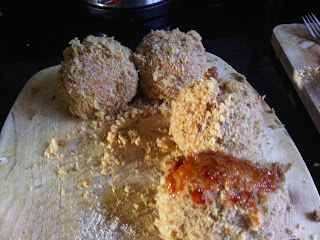 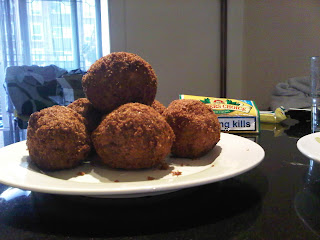 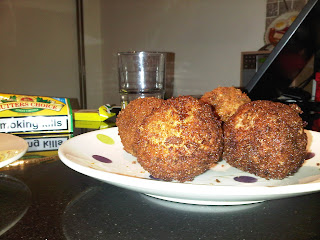 Fried within an inch of their little runny lives 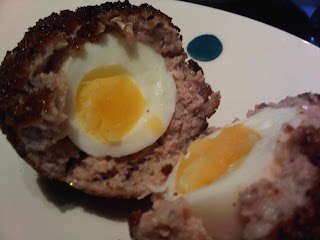