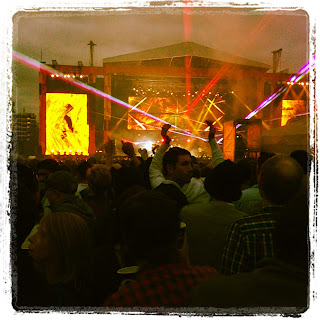 At 31, it can sometimes feel like you’re still acting the giddy goat by getting in a state every Friday and Saturday. 'What should a bro or sis be doing?', I hear you cry. Knuckling down and saving dosh for that all important home deposit? Cutting out bread and getting into exercise? Exchanging intake of narcs for consumption of Neal's Yard produce?

Whatever floats your boat - but if the inadvertent avoidance of maturity is a cause for worry or concern, then you should have been at the Stone Roses gig last weekend in Finsbury Park. If you'd attended, you could have witnessed the example set by the majority of the lairy blokes who rocked up. Ignore the attractions of fitness! Let it all hang out! Pep up your moobs with as much lager as possible! Put on that Reni hat - it's like being back at Spike Island! Have that other shy slice of Laughing Cow!

By the time we’d landed and found a ticket from a tout, nearly everyone we encountered was totally out of their tree. So out of it, they would have had difficulty in finding the tree from whence they had come. Or remembering that it was in fact a tree that they’d just got out of.

Indeed, people were going crazy. One young lad got as far as the gate then got turned away for involuntarily slapping a security guard. Why would you do that? Once inside it was also clear that the grass of Finsbury Park will never be the same again. There were hundreds of elderly dudes gurning up to the fences and taking a leak everywhere. Some of them didn't bother going up to the fence and just had a piss where they stood. If synchronised weeing was a sport, then sacks of gold medals would have been dished out. Shitloads.

But once you'd got through the gate, avoided the wee, laughed at the lads, saw the massive mess going on and bought an overpriced Fosters, it was all total vibes. The collective sense of giddy euphoria was overwhelming and before we knew it, we were getting as lairy as the rest of them, buying delicious small bottles of Echo Falls as chasers to our £4.50 pints.

So what happened? Well we arrived in time for the warm up DJ who played a classic indie disco set of housey classics probably last heard at the likes of 5th Avenue or 42nd Street back in Manchester the other Friday. Then The Stone Roses bounced on stage. The roar of approval was big enough to be heard on the other side of London and may have even have reached Sale if the wind had been blowing in the right direction. The holler was more like being at a football match, which was the vibe. Total matey camaraderie over a band rather than the direction of the ball. Nostalgia, being pissed, the teenage rush, Ian Brown's cheek bones and one of the best musical trios the world has ever seen. Watching and hearing Reni, Mani and John Squire (with a thick bouffonic plumage of hair and awful arts teacher waistcoat) lock it down is one of the most magical things you can ever treat your ears to.

Over almost two hours, the Roses blessed us with some of their finest moments - and lo, everything sounded fucking great. Made of Stone, Standing Here, Elephant Stone and This is the One were just some of the highlights out of many - all which were married to increasingly trippy visuals and lasers transmitting their music into space. Despite seeming like they'd been brought in from a 60s psychedelic film, the sights perfectly fit their groove. Especially when they took it way out on Fools Gold with Captain Reni at the helm.

It's obvious that they've long since put the demons of Reading '96 to bed (although granted this is the actual original band rather than a bunch of session musos) and are now sounding as tight and as sleek as you like. Even Ian Brown's voice sounds great. It's pretty much perfect. What a night. What a band. Ooofffff...