The Wedding of the decade 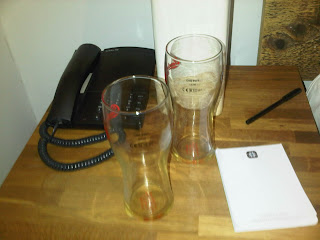 Weddings always honk of good vibrations - and the one we attended back at the fag end of August was no exception. Our buddies Chris and Zen were getting hitched and had requested that myself and regular Homebase customer and one time disco punk Def Stef man the ones, the twos and maybe even the threes to provide the soundtrack. This was earlier in the year, and meant that many of the moments inbetween times had been spent contemplating what to play and where to get that tuneful mother from. I asked the Idjut Boys back in June what one should play at a wedding bash - they suggested it would be a worthwhile notion to play music from adverts. It was a tip I took the liberty of ignoring…

By the time the big day came, we were armed and potentially dangerous - we had records, bow ties (which turned out to be too taxing to put on but the intention, if not the wherewithal, was there) and a Pret breakfast in our clammy paws when we boarded the train. Luck was also on our side as we bagged the best seats in the house right next to the bogs - there was plenty of leg room and enough space for his Defness to sew on a button and get a stain on his delicious looking shirt.

Our day time business ran like the bowels of a man with a runny case of gut rot - somewhat loosely. The train took us into the heart of Norfolk with just enough time to catch our lift and land at the venue (Titchwell Manor - check it here) - then cue an hour of panic - we were faced with wires and wires and stuff that had to go on the end of the wires for sound to come out. Thankfully, Stef is a man who loves wires and accompanying ‘stuff’ and after a slightly sweaty, frantic time we had sound and five minutes to prepare our wardrobes.

The important stuff went beautifully - almost - the bride and groom were successfully unified and we were soon nomming on champagne and slurping on mojito mousse in the palatial gardens of the venue. The drinking and general tomfoolery was also large. Unfortunately we enjoyed ourselves so much that by the time we got to DJ I was seeing a few things over than records. Mainly big, fat pint pots rippling with lager.

Despite us both being a little all over the shop, Stef did a mint job of holding our musical show together and ensuring the wedding party got their collective groove on big time. We played a selection of bangers, had a mild tiff over the suitability of playing Imagination’s Just An Illusion before passing out in our room with the single beds pushed together.

The next day started off groggily but went on to be just as big - albeit in a different way - a bloody mary and tight fry up for breakfast, a stroll on the Norfolk beaches, a cig in the dunes, a spot of sand castle building before a slab of barbecue in the garden of the parents of the groom. Props to the groom’s dad - he barbecued some immaculate meat and even allowed us to play the Kiss the Fist podcast to the selected attendees.

Nice one again to the bride and groom for letting us play - it was a mint do - and props to everyone we saw and met and drove us around Norfolk with a shitload of records in our paws. We had a right time...