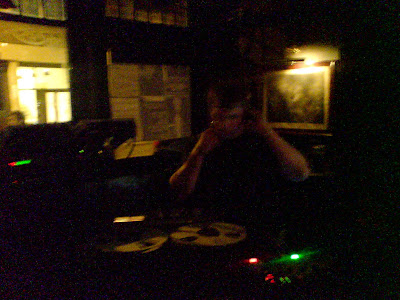 Hype day t’other Sunday. With the lagers of the past 48 hours equating to a blanket of bad taste and gloom, it was a day for manning up and taking the fear on the chin.

After aurally ingesting an injection of good cheer to the face via a viewing of Fantastic Mr Fox, we headed down to the Royal Festival Hall to catch a ‘free’ dubstep jazz session fronted by the chubby digi-skills of Bass Clef. It was a classic jazz culture hoe down on the South Bank. Coffees, kids, newspapers and earnest conversation. We sidestepped stretching the brain fabric in a philosophical direction and opted for the bar.

During our first pint we witnessed two dudes sitting in front of laptops plonking away at their keyboards - they wore masks while frantically typing out code live. Each letter and piece of typing equated to some form of skronking feedback while onlookers sat on bean bags and the floor bopping away to the ‘happening’. Groundbreaking? Not really. Boring? Perhaps. Idiotique? Defiantly.

The second ‘piece’ involved the projection of piano keys onto the back wall while carefully placed microphones reacted to the light from the keys to emanate sound. It was time for a bifta. If we hadn’t, then the levels of potential pretension could have become so engorged they threatened to blow the entire Festival Hall away. I’m all for a freak out but there needs to be something resembling a point. Purleaze.

When we were mildly zonged, Bass Clef ambled on with trombone, sequencers and armfuls of heaviness to blow the foam of our pints. It was top bottom heavy until the accompanying musicians attempted to join in. Even the Clef sarcastically announced “now it’s time for a journey”. Verve colloborator BJ Cole looked a little lost - come on grandad - this is bass music - not lullabies for twats -Thankfully most of the little shitty kids spent his set walking around with hands over their ears to add to the unreality of proceedings. .

On the way home we checked in with Greg Wilson at the Horse and Groom - the place was like Ibiza except at 6.30pm on a wet Sunday evening near Liverpool Street. Disco, drug deals and dancing were all going down - It was almost too much and meant an emergency stop for a happy meal en route home. Top conkers like but I’m a little pooped just thinking about it. 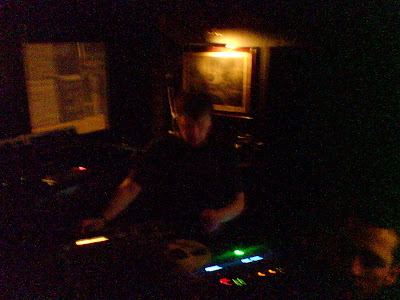 Here we go - BIG tune for the festive season to stuff inside yer turkey - South London's Joy Orbison gets all large and in charge on the follow up flex to Hyph Mngo. This is on a strictly need to know basis. Know it below... and read my oh so important thoughts on the matter underneath it... Big up...