Kendrick had a dream 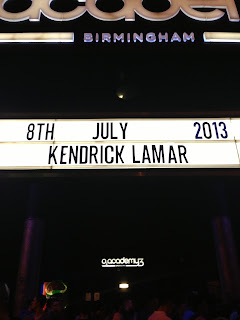 There are many things one likes doing on Monday nights after work but they don’t often involve hot footing it up the backbone of the UK to the midlands to go and watch a gig. Usually following Sunday’s cold beer sweats, mild fear and hot flushes, the first day of the working week is one to be endured rather than enjoyed. Your standard Monday finishes in a large hot meal and an early night in a bid to ease the panic and make the next four days more palatable.

However, on a Monday eve at the start of the sweatiest July we may have ever had, we went into work hungover, slogged through the office hours, then scarpered off to Euston to train it up to Brum to catch a gig by US hip hop hero Kendrick Lamar. When booking the tickets, our adventure seemed like a reasonable proposition. But the reality was we were spending the best part of 100 notes on a Monday night out in Birmingham when we all lived 200 plus miles away. It was even more ridiculous when the majority of the party all needed to be at their desks the next morning for more work-based pain. Indeed some suffering was on the cards as the final choo choo home meant we wouldn’t be tucked up in bed until near 2 in da am.

But without such agony we wouldn’t have had a chance to witness Kendrick in full flight. And fly he did with a live act that sounded satisfyling meaty to the ears. Rather than just the two turntables and a microphone vibe that we were pessimistically anticipating on the journey there, he brought a full band to a crowd which was far more Saturday night in Ayia Napa than a sticky Monday eve in Brum.

The Guardian’s Mark Beaumont has recently been banging on about the difference between gigs in the capital and those across the rest of the country. His premise is that those outside London are always more appreciative of watching music being performed in the flesh. And he’s correct. Us in the south have enough going on to be disinterested when it comes to catching a show. The mosh pit at the Birmingham Academy put going to a gig in London into sharp contrast. And this initial burst of heavy slap and tickle was only to the ‘EDM’ flexing warm up DJ. Oof.

The mosh only became more fierce when Kendrick appeared and proceeded to dance us through the finer joints on his second album Good Kid, M.A.A.D City and beyond. Bitch Don’t Kill My Vibe, Swimming Pools (Drank) and Money Trees all sounded fucking large when they barrelled off the stage and sparked the baseball-hatted, weed-toting hoards to pummel each other and those aroud them even harder.

Kendrick’s svelte self and super live outfit managed to sound both fucking lean and even more fucking mean during their 90 minute set. He conducted the crowd through an explosive sweatfest which culminated in one all mighty jump around before vanishing in a cloud of crowd moisture leaving us to the last train and a mighty drunken snooze. Kendrick definitely has had a dream. It's loud and has taken him all the way to the midlands and beyond. This kind of hip hop should neverrrr stop.