Music is everywhere - there's so fucking much of the stuff to wade through at the moment. If you were to try and drag down everything decent you wouldn't have time to eat/sleep/breath... Here's some of the beauts that have been keeping me up...

The Boiler Room - Sheffield sonics in ya grill 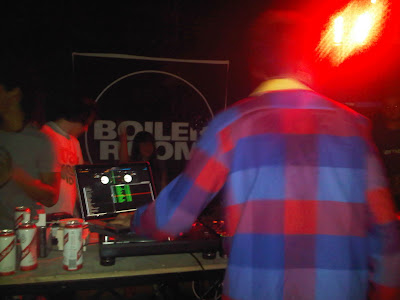 If you're into your bass and bleeps, then you must have heard of the Boiler Room. It's an online stream of DJs playing sets in club-like locations from across the globe with a gargantuan surrounding hype. Why? Well, the line ups are beamed in from the bleeding edge of what's new and left in contemporary dance. The whole endeavour is seen as a barometer of taste by trendies looking to keep abreast of what's going down in future garage town.

Is it an exciting idea? Do we need to watch DJs playing sets to a camera while some dude intones monotously over the top on a mike? Or is technology and the like getting too big for its digital boots? Love it or loathe it, the Boiler Room vibe has caught on like some sort of computerised fire. Shows are now broadcast from all over the fucking shop. Whether you like it or not, the future is here to stay. Get with the programme gramps.

Those in 'the know' can get invites to attend these bashes in person - and luckily, through our lingering connections with South Yorks, we managed to get on the guestlist to the Sheffield takeover of the affair for the Agitated album launch party. Even better was the actual location, which was just round the corner from our gaff.  We'd tried and failed to attend a session with Jackmaster and Diplo back in the '011. Somehow we'd been fed incorrect intel regarding the venue and ended up banging on the wrong club door for half an hour. Thankfully, a Wetherspoon's wasn't too far away so we spent the eve outside the pub bitching about how shit it probably would have been anyway.

This time round we got the correct venue and were firmly installed inside around the time the broadcast started. Weird as it is watching the thing, it's even weirder standing around at half 8 on a Thursday evening, stone cold sober attempting to get into the bassline the Sheffield contingent brought to the fray. You're all too aware of the watching camera and the internet audience consuming the sets at home.

But, as ever, following a handful of lubricating Red Stripes, we managed to lock the vibe right down - the room where the sets are performed is small enough to throw a handful of cats around in. But even hotter with more added bass - Thankfully, Sheffield crew was on rare form. We had the pleasure of witnessing classy sets from the likes of Pipes, DJ Q, Toddla (ably backed by Shola Ama and Serocee), Walter Ego and last but by no means least, the Forgemasters.

The whole thing was a sweaty, sweaty vibe - Walter Ego looked suitably young. Pipes looked suitably dapper while DJ Q didn't even pause to remove his hoodie or Nike back pack - that's how bass men roll. Toddla played a mish mash of new material and upfront re-rubs before the Forgemasters put down a solid line of housey bleep to take us home. It was a sweaty, electronic embrace of an odd kind of future. Do we really like it? Do we really need it?

Check out Toddla's set here and make up your own mind...