Numbers turn a car park over 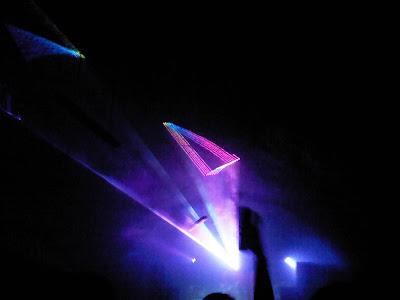 If you've taken just a small amount of notice of the sort of shit going down in electronic circles over the last 12 months, then your ears should be well familiar with the work of Glaswegian label Numbers.

Hudson Mohawke, Rustie, Jackmaster, Spencers and Goodhand are the men at its core but their releases and dances have incorporated sonic action from the likes of cohorts Deadboy, DJ Pierre, Redinho, Jamie XX and other key electronicy, wonky players.

To celebrate what has been a mammoth year for the crew, they hosted a huge party in a central London car park for their dedicated followers, who turned out in their droves to pay their respects via the rave. The bill was a wet dream for any fucker who reckons their fingers are wrapped around the pulse with much of the aforementioned Numbers team representing heavy stylez.

We arrived already in a half mangled state to witness Deadboy and Spencer sparring over a snarly mixture of fresh fire and older electronic classics before Hudmo sent the place totally upside down. The oddly shaped gent played a crunchingly heavy mixture of r'n'b and classic hip hop as well as many of his own big 'uns to send the car park spiralling into overdrive. It culminated in R.Kelly's Bump'n'Grind, which was a fittingly daft conclusion to a sweaty, party hard set of b.a.n.g.e.r.s.

Our collective sense began to deteriote rapidly at this point. One of our number was lost down the front out of his box on two bottles of cheap plonk while the rest of us were baying hard and boogieing strong. Rustie carried on where Hudmo left off with a large locker of hyper-real tackle whereas Jamie XX and Jackmaster were slightly less garish with a more standard selection of house. Although this was how it looked from where we were standing. Which was near the back. We left before the dawn close to go back round our ends and sing-along to Coldplay albums for an hour before straddling the hay. Big business from a big, young team. Do your maths 2012. Numbers are coming for you...