Fresh aural heat has landed thick and fast in 2012 - and this biggie from Eglo Records crew Funkineven and Fatima is yet more proof of the creative fire currently being bandied around like an Olympic torch. Check the neon video of evidence...


And here's a video from FACT magazine on how they made it. It's like watching a surgeon at work... 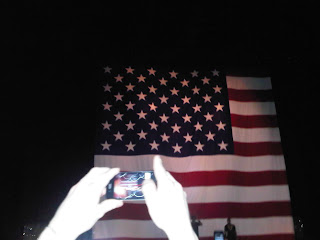 If you went to the pub with nay sayers of the 2012 live gig experience and got involved in a bicker, it's fairly likely they'd argue that this whole racket has become too bogged down in nostalgia.

And tis true. A shit load of elderly acts have been restringing their instruments and getting back out on the road in search of a little more dollar - in a supposedly struggling industry, this is where many see the money as being at.

Thankfully, this year's must see show, Watch the Throne, is not one based on (too much?) looking back - and in many ways, it's upped the ante for what constitutes a spectacle.

We clocked them on a Sunday at the notoriously vibe-less O2 arena but lo, they brought atmosphere, character and even fire in buckets. Both adorned in leather gear and carrying enough hits between them to do something serious, they swaggered through nearly two hours of tight hip hop music to a rapturous and skunk-fuelled crowd. The whole ting culminated in almost six rewinds of the album's highlight, N***** in Paris. Audacious in the extreme...