Cut Copy visited Sheffield the other week and boy we were excited. Their 'So Cosmic' mixtape has been in my ears for yonks and, like a cheese slowly ripening, it's getting hotter and more tangy with every aural altercation.

Here's the review I did for FACT and a link to their site where they kindly put it up...

Cut Copy are inscrutable shadows in and behind today’s garish, post-electroclash musical climate. Debut album Bright Like Neon dropped some four years ago, its mix of 70s AOR, italo, house and 80s indie pre-empting a future full of Klaxons, (nu)raves, and new guitar bands declaring their devotion to Frankie Knuckles as a matter of course.

Since then, the trio have been on tour forever, with only their FabricLive CD and more recent So Cosmic mixtape the only reassurance that the band are still a fully functioning, studio-bouncing entity. Only snippets of new material have fallen through blogs and the interweb, possibly giving lesser bands a chance to try and catch up with this Aussie polarisation of song and dance. Wednesday night and it’s a peculiarly muted crowd in the Plug.

The support acts didn’t really stir our collective tune poles and even when Cut Copy finally stepped onto the stage, they at first scarcely resembled the zeitgeist-pillorying mothers we were expecting. The granny-knitted jumpers and shuffling gauntness suggested we were in for a shoegazing fuzz-fest rather than what we really hoped for: a cowbell-nabbing run with the latest trio to have their studio knobs flicked on/off by DFA boy, Tim Goldsworthy (he’s at the helm of imminent new LP, In Ghost Colours).

However, like a bunch of finger-popping caterpillars going all butterfly our on collective ass [Urgh - Ed], the trio’s shy start really took off, treading a fine line between more introspective guitar-based business and housey electronics, not unlike Alan Braxe and Fred Falke gently socking it to Guided By Voices.

The seemingly random mess of folk present went from being stand-offish starers to moshing air-pummellers within the hour. Older tunes such as 'Saturday' and 'Future' were taken out for a bomb of madam and a serious lunge (with only a sharp synth line preventing total immodesty) while 'Lights and Magic' pointed to a band who have stepped once and for all out of the bedroom of boffindom and fully embraced the power of the disco ball.

The all too brief soiree culminated in the massive, ravey euphoria of 'Hearts on Fire', a tune which sounds like it was bathed in liquid ecstasy before being birthed, while many of the assorted throng were doing a good impression of feeling a late Friday night rather than an early midweek finish. If the album is half as good as the new material which gets an airing this evening, then the cut copyists who appeared in their wake are going to have to have a serious think on how they can better this… 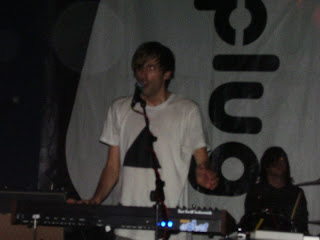 Skinny man taking out his anger on his synth 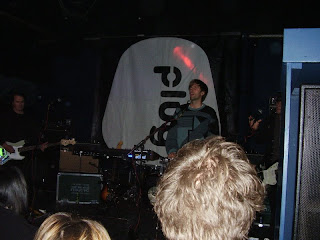 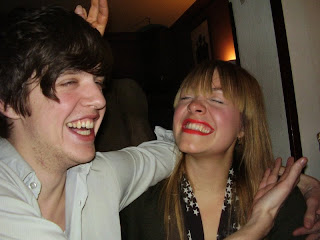 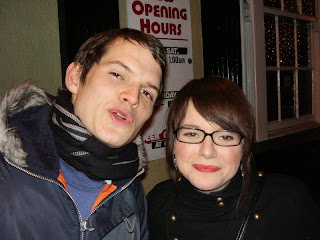 More shits and giggles
Posted by Jimio at 15:08 No comments: 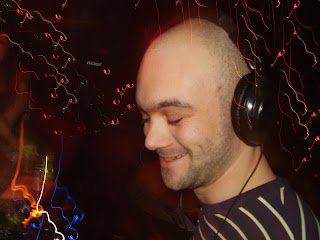 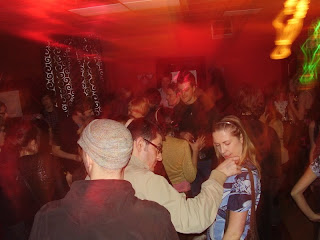 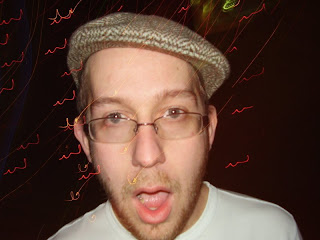 Look at this dubstep loving sore - Rich C90 in the midst of the dancefloor meltdown...It's so big he can barely keep his tongue in his mouth... 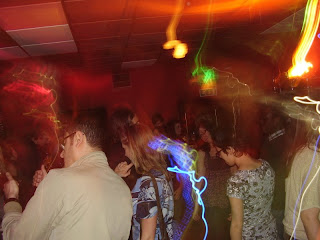 The bass off in full effect...


Jeez louise - it's been ruddy ages since I last grappled with my typewriter and updated this ere blog up - I've been slack make no mistake...

The past few weekends have been full of naughtiness. Leave work on a Friday hellbent on staying up forever on some sort of chemical quest to find the chosen land (i.e bed) via a few cinematic classics (e.g Tremors, The Warriors) and a good old rant about vegetables.

Here for your delight are a few images from the Rough Disko party we through a couple of weeks back. We did get to bed via a debate on the merits of cauliflower cheese. The next day we visited a curry house where they sold you poppabombs, a savoury starter which resemble soggy rice crispies too fat for your gob.
Posted by Jimio at 14:40 No comments: