Wu-Tang ain't nothing to funk wit

Alexander Nut is Eglo Records boss and all round good egg - he believes he learnt more from Wu-Tang than he ever did in school. On this evidence it was time well spent as his new retrospective of Wu-Tang classics for Oki-Ni is the motherfunking bomb...

The end of every year sees every man and his mouse attempting to compile comprehensive lists to sum up the proceeding 12 months and what the most proper aural bits were.
It's a list. You've made. And it's boring. In the spirit of boredom, here are some of the tunes which have been getting my goat over the last month or two. These ain't been mentioned before on here cos we never look back and we always looking forward... Fuck your lists!

With a New Year comes new danger and there aren't many functioning bands out there more dangerous than Temple of Coke - these Sheffield dudes could rival the Arctic Monkeys for internet hype, tunes and pure, visceral pop sense. Well maybe not, but they've got some serious vibe going on. Scroll down to check their latest video, a take on the classic Pure Shores by nineties girl group All Saints. The lads have been invited down to perform at the latest trendy Dalston night spot Birthdays this weekend so it's a good time to get to know 'em... Listen to main man Big Al on their flexxx...

Who are Temple of Coke?

How did you come together to make such beautiful music?

We have been friends for a number of years and have played in all kinds of groups together, including a band which did a cover of key parts from U2's Rattle and Hum live album.

The cover version of Pure Shores is destined to be a huge YouTube smash - were you on drugs when you filmed the video?

We were trying to be on drugs. If you watch the video carefully, you can see Tich is struggling to find a lighter to spark up his zubbie. That is probably the longest Tich has gone without blazing for the last five years. I had to get straight out of bed that morning with a bad hangover and get in a car to Cleethorpes. It's safe to say we all felt like shit that day.

What's 'Doing It' all about?

I think they keyword is 'it'. I like doing 'it' with fit birds. Tich likes to blaze 'it' and Archer's favourite Stephen King book is 'It'.

There's an album on the way - are there any themes to the record? Where did you make it?

We record ourselves at Bok Studios - big up Bongo Burt who 'runs' the place. I saw him start on someone at a party the other night, fall down the stairs and split his head open. It was live! The only themes are the twin fears of running out of kingsize rizzlas and getting abducted by sexy aliens who do experiments on our reproductive organs.

Who do you cite as influences/contemporaries?

You're playing Birthdays on Saturday - what should the trendies of Dalston expect? Are they ready?

On Saturday night when we play Birthdays, the front row can expect to be covered in man seed.

Have you ever been inside a Temple of Coke?

Nope, never been inside in any kind of temple but I have been inside a Darth Maul and costume and it felt wonderful!

Temple of Coke play Birthdays in Dalston this Saturday (12 January)... Check out Pure Shores below...see you there... Christmas day what a day - this year was a special one - mum used that hostess trolley like she's never used it before and the results were spectacular. Nice one ma and pa - you smashed it... 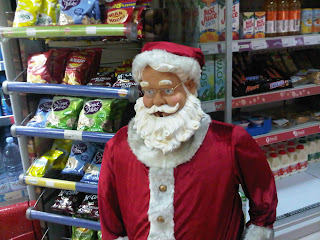 The pre-Christmas run up is often a glorious time when work merely becomes a buffer between you and your next pint. You're hungover from December 2nd and remain in a state of semi-pishedness until the close of the year when you realise there has to be something else to life other than constantly getting bladdered. Everything comes to you through a thick cloud of lager which made our decision to watch the Happy Mondays perform a Christmas show at the Roundhouse seem a good one.

The Mondays themselves completely slayed the Camden venue - they married shambles to funk in a style which almost suggested they'd be rehearsing. Jokes of course, as these one time mad heads most definitely had been practicing their thing as they probably need to wrangle as much dosh as they can from the nostalgia flex - and why not? Every other fucker is at it. And Shaun's got middle class kids he needs to keep in school. But the Mondays sounded much more vibrant than the corpse of a acid house good time being wheeled out for the evening. In comparison much of the crowd seemed to be a much duller proposition. While there were some old gurners doing their thing, our attempts at smoking cigs in the venue were met with scowls or threatening verbal missives - 'Put it out - or fuck off'. Sorry gramps but it's Christmas!

A tale of two roasts 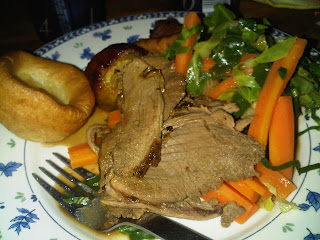 24 hours in the food game at Xmas can see a brother gobbling foodstuffs which, while being made of similar ingredients, exist in totally different dimensions. One roast can be from Mars, the other from Venus. And so it was that on a Sunday, we sat down to enjoy a juicy leg of lamb at a gaff of a mate's in Harlesden. A pavlova had even been constructed to follow it down the gullet - gobble gobble.

On the Monday we went down from the penthouse to see what was being consumed on the pavement as we visited Wetherspoons in Hackney to sample their traditional festive grub. The roast was priced at a very reasonable £7.25 for both the meal and a delicious drink. However, after handing over the dosh, we were faced by a series of obstacles. It may be worth investing a little more in your roast dinner to ensure all parts of the plate have been exposed to similar levels of heat. Much of our din dins were quite chilly in parts. I felt sorry for some of the sprouts who looked like they needed some thick, thermal underwear.

The spoons eating experience en masse is quite something to behold. Meals fly out of the kitchen with no logic or any sense of consistency to the order in which they were requested. Some turned up with weird bits attached while others just didn't turn up. After a while, one of our party opted for a replacement soup as the one he'd requested had got lost somewhere between the kitchen and our table. His soup substitute arrived but after a while our chum discovered hunks of ham cowering under the green sludge masquerading as soup. For some of our party, this would have been deemed a true victory but for this poor veggie it was only another thing to be let down by.

Even worse, when we asked to be refunded in booze, we were informed that it wasn't company policy. You bastards! To commiserate we had some more pints and ignored the lack of apology. Spoons, I love you but you're bringing me down. Only slightly. See you soon...

Bonfire of the Vanities 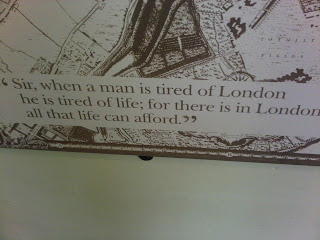 Big shit has been going down these last few months as these images testify. From fat pies to flaming cocktails, the last quarter of 2012 had it all in the spades... 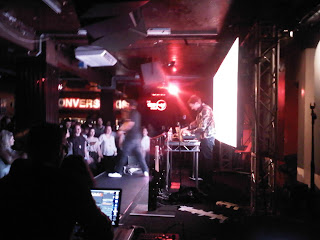 The 100 Club on Oxford Street is a venue saturated in rock and roll history, tales and mischief - which makes it slightly surprising that Toddla T showed off his new 'live' show featuring the vocal skills of Shoala Ama, MC DRS and Serocee at the venue. While the sounds of the Sex Pistols and the Rolling Stones previously reverberated against it's walls, Toddla day-glo dancehall pop sat slightly incongruously amid all the heritage and nostalgia. But no matter, the 'Sound' did their schtick on stage to a group of youngish looking mid-week ravers. And rave they did. We stood near the back feeling very elderly and under-dressed for such a showing. You can watch footage of the set below... 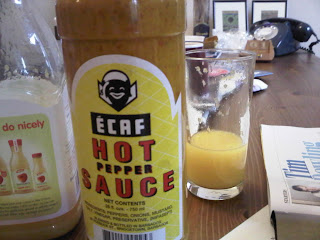 Great fry ups and great parties - if that's all a bro got, then he got something good going on. Our recent autumnal jolly to Bristol had two of the best we'd nommed on for some time.

After a Friday night tanning lagers in some of the city's seedier watering holes, a suitably sumptuous plate of greasy treats was required to soak up the bubbles. And lo, it was delivered with clean cut authority and eaten with wide eyed wonder. The dish was a life ring to a drowning man with black pudding was so good it could have been beamed in from space.

GOOSE NIGHT was the evening after where some preposterous tapas was taken care of by our collective mouths. Confit of goose and quince must have been two of the ponciest food stuffs to get stuck between these teeth. But eating was followed by a classic rave in the downstairs of an Indian restaurant with Amsterdam house dude Young Marco. He provided a healthy slice of drugs music for the basement to shake to which saw us up until first light and only getting once it had gone dark on the Sunday. Nice one Bristol crew...


This one is a definite bangggeerrrrr....