Modeselektor vs Fabric vs Wetherspoons 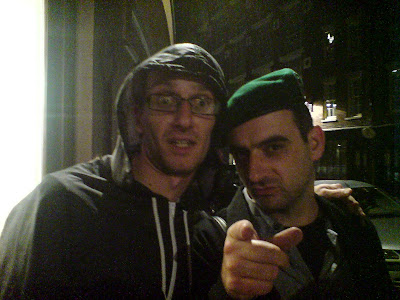 Thursday October 22nd - BNP buffoon Nick Griffin’s leery mug is scratching itself across Tvs nationwide and Fabric is open for business - vive le super club and its own special protest. The world may have gone mad for the BNP hype but we’d removed ourselves from the political equation by opting for snacking on a ‘large one‘. Says muchos lotos about our take on the ‘media furore' don't it.

Being a school night and all, we didn’t want to get too bashy… but by the time we’d convened at Wetherspoons in Farringdon it was almost too late. Some frenzied chicken jerking in E8, a Heineken, boogaloo and bus ride and suddenly all bets were most definitely out of the window - or at least in the pint pot and being downed at a rapid rate. The first round in ‘spoons cost £16, which anyone with even a passing interest in their reasonable rates will realise is fairly horrifying.

After watching Griffin’s ‘sweating sex offender’ vibes on the box in ‘spoons with the subtitles on, we rumbled off to Fabrish with the collective bi(f)t(a) between our teeth, working a lairy flex through Farringdon - Boo yacka boo yacka - Amped up to the gills on night juice, we were readier than perhaps a quartet of large time loving twats with work the next day have ever been.

Landing at the club and the anticipated hoardes were not in evidence - London crew the Patchwork Pirates were on playing minimal dubstep to a half empty room and the Stella was expensive. It must cost a lot to pay for the silver trays they insist on serving your change on in there. I’m not after table service - I just want to stick the foamy liquid in my mouth and down my front. Whatevs, by the time the lights went up for Modeselektor, we’d endowed enough of said foamy shit to see a vibe all unwholesome and glistening… and the people had come. Hold tight...

The pair were bang into it - Gernot Bronsert was all Morph from Tony Hart’s show - gurning, limbs waggling while Sebastian Szary partner crime was more restrained - not in a pencils, easel, glint of a beast in the eye sort of way - but almost military in stance and gait despite the hardness they were dropping - Outside when we collared them it made even more sense - He was wearing a fucking beret and vibing hard.

They rinsed through some of the best bits of both albums - Hello Mom and Happy Birthday - two throwaway titles that don’t really bely the brains and bangingness which lie within. Modeselektor’s flex is all low end electronica, sub crunk woofers united by techno. Let Your Love Grow with Paul St. Hillaire words gliding atop was glitched ragga thump with a heart while The Black Block, Hyper Hyper, Hasir and Kill Bill Volume 4 brought the rave rain down on us all.

By the time the pair popped two magnums of fizz all over the crowd in some sort of orgasmic, weird celebration of all things big and hard, we were down the front, roaming on a mosh pit style flex.

Bristol’s big man - Joker finished us off by playing a groovy selection of all tings techno and dubstep. Rinsed on the crystal funktion one system in Fabric’s main room was something to behold and the perfect foil to the German duo. My mind was proper blown by his business - Like the man with the milktray - Sleek, elegant yet you wouldn’t mess with him cos he’d have you up against the wall with one hand round yer throat and the other playing with your balls… 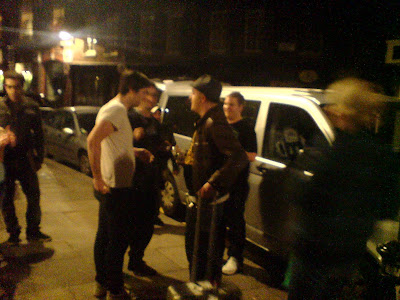 Outside on the streets - they call it papping nerdstyle 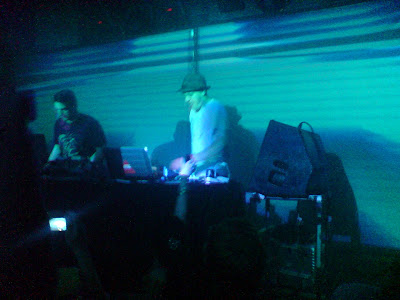 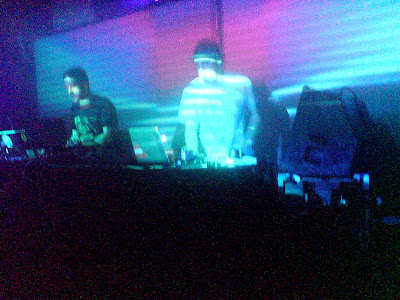 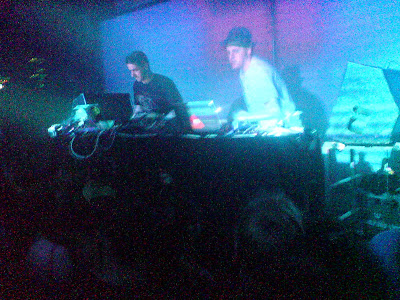 On it Thursday stylings

Incidentally when they played Kill Bill VI, it looked a little like this...