It's a Wirral ting 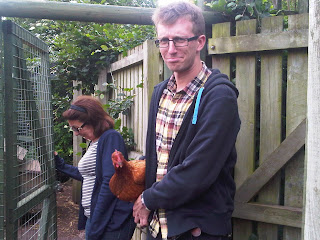 The Paradise Peninsula does exactly what it says on the tin - paradise indeed. I've never seen as many leaves and salubrious vibes as I did when we went up for a weekend pon de 'Squirrel'. I even held a 'clucking' hen. Oh yes - went to the theatre to check some am dram, had a fry up with hen eggs, went to a village fete, had a roast - perhaps the most civilised weekend in living memory... perhaps... 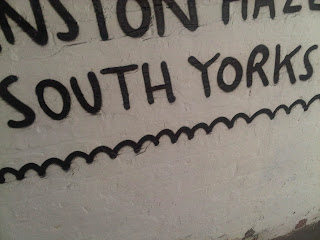 For one weekend in the midst of summer 2012 it felt like Sheffield was the centre of the good shit. Things have changed. I ain't been a resident of the city for nigh on three years but remember the regular weekend feeling of frustration at not being able to catch a hype musical buzz in a reliable location. This wasn't the total downer it may initially seem - the lack of owt up our collective street meant that when the hype did land, it was all the better and more special for it. We had some big, big evenings. But sometimes had to seek high and low for the nights that whet our collective whistle. Then, when the trickle dried up, we set up our own.

Many would argue that this is part of the beauty of South Yorks. If you can't find what you're looking for, then get off your arse and do it yourself. But, for the weekend of the Sheffield's Tramlines festival, it felt, for perhaps the first time and in the best possible way, that there was too much to do.

Tramlines has been bubbling along since 2009 and this was the first year I'd attended since it was in short trousers - without sounding like too much of a wistful cheese monger, you could taste in the air how much the thing has grown. The whole place was buzzing to fuck with music seemingly bubbling away behind every door. Which makes for a pretty heady vibe ... After the inevitable five hour coach journey up from London (yawnnnnn), our Friday began with a trip to the Harley to check new hype merchants, AlunaGeorge do their electronic r'n'b business to a suitably frothy and sweaty crowd. Then the Box Jams DJs stepped up to deliver a hefty dose of classic electro, house and techno to the slightly confused looking trendies on the dancefloor.


'Seek and ye shall find' goes the maxim of Sheffield's nomadic club night, Kabal. Its Friday night fixture on the opening night of Tramlines was no exception, with the evening's only pre-match publicity being through its usual word-of-mouth and email whispers. The bash was fairly mind bending - you had to walk through a boxing gym to reach the dancefloor while the music was a jump up mash of garage, jungle and dancehall blasted out at a testicle wobbling volume. We drank and danced until dawn, then opted for another beer and an hour mooch home rather than a cab. Wise moves from old heads...

Saturday started off in a dishevelled fashion at midday - we coated over the cracks with a greasy fry up before heading down to Endcliffe park for a child-friendly afternoon of folk music and real ale, all served up in the sunshine. It sounds delightful and in many ways it was, except for the bamboozling strength of the beers. By the time James Yorkston had shot his musical load, albeit in the most acoustic way possible, it was veering on time for a sit down and a glass of water. However, being hardy, daft and adventurous types, we jettisoned the sensible option in favour of continuing boozing at the massive Signals party at Yellow Arch. We queued for an hour to get in, I bullied some 20 year-olds into giving up their stash, then my memories disperse - the one thing that does stand out is German techno teenager Objekt smashing the place right up...

Sunday was predictably even harder than the previous day - not even combining sausage and salmon in one fried mouthful could dilute the ever increasing rough edge. We had an hour down at the amazing South Yorks event to witness the premiere of Kid Acne's Zebra Face before boarding the bus for the return leg back down to London. Props to everyone who put us up and propped us up. Sheffield - you were amazing... Roll on next year... 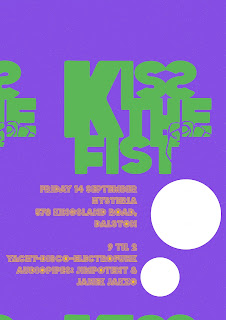 Kiss the Fist are back in the game this coming Friday 14 September at Hysteria in Dalston. Reality has got in the way of recent KtF shenanigans so we're itching to get in the ring and stretch some serious disco muscle. We're upstairs in, what is by all accounts, a pretty small bar/club so get involved early if you want to witness what's gonna happen. Three more sleeps until lift off. Bring on the chaos...
Posted by Jimio at 15:23 1 comment: