Not mentioning hair to Tim Burgess

Tim Burgess used to be known as the lead singer of The Charlatans and for being fancied by any self-respecting indie loving teenage girl. Now he's perhaps most famous for being teetotal and having, what some might say, is really bad hair.

I had the pleasure of speaking to him twice over the past two weeks for interviews on different tacks. On neither occasion did I ask him about what was going on top of his head. Instead I spent more time prying on into was going on in his head. A chance missed? You decide below...

Read the full interview with Tim about songwriting. 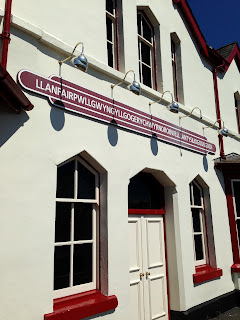 Llanfairpwllgwyngyllgogerychwyrndrobwllllantysiliogogogoch is quite the mouthful. As is, arguably, much of the Welsh vernacular.

On a recent Bank Holiday flex, we did our best to embrace this dialect as much as possible by journeying along the coast of North Wales and memorising the Welsh bits on all the road signs. It wasn't the sole point of our voyage, it certainly spiced up our short tour of the more glamorous parts of the north west. While we were of a Welsh bent, it seemed only natural to pay our respects to the town with the longest place name in Europe.

As fucking daft as that name is, it turns out townsfolk made it up for their railway station so they could get themselves the accolade of having the longest moniker. Which undermines the whole point. And says much for the mentality of the town's inhabitants. Or at least how fucking bored they must have been.

If you’ve ever visited this small spot on the lower cheek of Anglesey, you’ll know that apart from the train station and the peculiar shop with huge amounts of tat inside it, there’s absolutely fuck all there. We acquired as much merch and photos as we felt we could get away with before doing quick one to find somewhere more interesting to basque in the bank holiday heat.

The rest of our time in Wales had been wonderfully pleasantly passed. We’d stayed at the Liverpool Arms Hotel in Beaumaris the previous evening which had greeted us with a dilapidated sign falling over the entrance. That sign's vibe was heavily reminiscent of the League of Gentlemen which is a fair description for the whole place. Exploring Beaumaris takes all of 20 minutes before you settle into what the rest of the populace seem to love doing. Drinking. There’s more pubs here than anything else some of which are weird and others just well weird.

So after checking out some cows and bulls, we ended up at a boozer with live music from dynamic acoustic duo Kev and Miv. I felt a bit sorry for Kev as it seemed some of the punters were into the idea of giving him a bit of verbal lip and blowing a communal trumpet when he tried to sing. Despite his nerdy appearance, it seemed he could take it. Big up Kev. Nice chords mate. You smashed it.

The first evening of our adventure had seen us take on the Wirral's only club entitled 'The Grange' for a 30th do. One sharply dressed susan sported the timeless look of jeans with an embroidered dragon on the flank. Which was rather in keeping with the Welsh theme. Big up to that dude for ensuring his sartorial flex was on point. Wales ting!