I'll have a half please mate 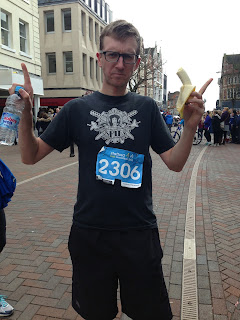 Physical feats of endurance aren't something that anyone reading this blog thinks goes on regularly for its author. And to be fair, the only ones that really came to pass were 'no kip' sessions which had us hibernating for a week and avoiding the outside in fear of being recognised. However, of late you'd be (mildy) surprised. We're not talking doing bench presses, lifting weights or throwing shotputs. Or even star jumps which are fucking impossible if coordination isn't your thing.

But I did sign up to do a half marathon earlier on in the year to rather churlihsly prove a point than doing anything nice like raise money for charideee. The whole process was actually (surprisingly) enjoyable apart from the day-before-pre-match nerves. It feels like the day before a very important exam. And one which, frustratingly, you can't binge drink your way through. Anyhoo it got nailed in less than two hours and no one got hurt. The likes of Peter Cragg, Joe Todd and Dan Shone are actual men cos they nailed proper ones. Props to them. And here's some proof I didn't come a cropper...

Getting up inside Abbey Road 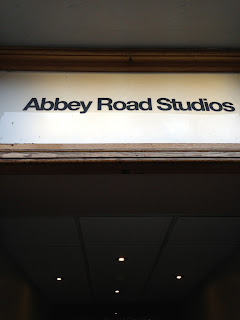 The closest I've ever been to a real life Beatle is via the magic power of their 'rock band' game in our front room.

Between wailing away to the best bits of their back catalogue and chugging on lagers, we'd talked of going up to Abbey Road Studios to mimic the famous album cover on zebra crossing. But I never imagined going inside. This all changed when via the power of work I managed to wangle a pass to go to the Inside Abbey Road - the best studio in the world lecture.

Beatlemania certainly seems to be continuing apace if the vibe around the talk is owt to go by - except it's older, balding men causing the kerfuffle rather than the pubescent girls who screamed whenever one of these scouse beatmaker shook their mop back in the sixties.

If you ain't been to Abbey Road before, the vibe is pretty fucking weird. On the zebra crossing outside, there's a permanent line of tourists all looking to get their photo taken while frustrated motorists pomp their hooters and try to drive past. Get closer and the hysteria is more tangibly etched in the graffiti on the wall outside the venue in barely legible, excitable scrawl.

It's once you've walked up the steps and got inside that you're confronted with the real madness. Everyone takes pictures of EVERYTHING (moi included) while they've even set up a mike in Studio 2 (the one where all the good shit got laid down) so you can get your photo posing pretending to sing. There's a queue for that particular attraction.

The talk (or lecture as the two American studio nerds who dish it out bill it), is all fairly low-brow. You can't help feel that they've managed to pull the wool over someone's eyes to let them have such a sweet gig. And the stories they dish out aren't all that. But no matter, just being in that room is pretty fucking surreal. The big feeling you come away with is just sitting in that room and sharing the air that caught so many of pop's best reverberations. I had my mouth open wider than usual for much of the talk in the hope that by osmosis I'd get a smidgeon of that talent. Having attempted to sing since, the charts are still safe from my tonsils for the moment...

Find out more from my interview with the two authors of Recording the Beatles...