Running up inside Mancunia... 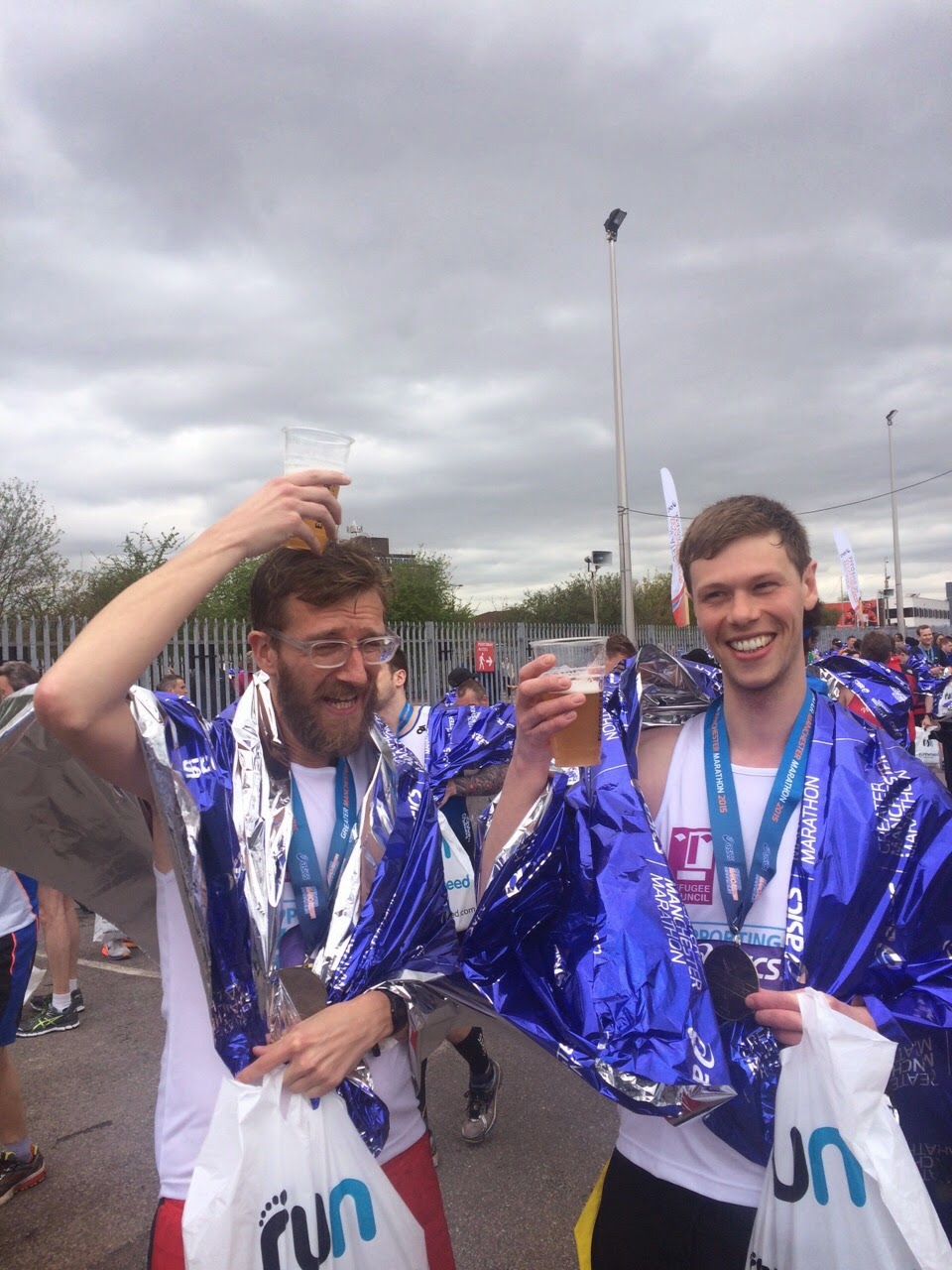 Manchester is not the first place you'd necessarily think of when rambling on about running. It's known more for Oasis, Tony Wilson and rain but just the other week myself and my man Craggsy took a lengthy journey up the country to Mancunia to take part in the city's marathon. Why? The reasons are lost in the annals of time but may have been something to ease the guilt of the hefty Christmas binge drink. Most sensible folk would give up the beer for a bit but we chose to carry on drinking and start running three times a week instead. Whoop? Whoop indeed. Especially when you're doing 16 miles after eight pints.

Massive vibes to everyone who sponsored us in our endeavours. We limped over hand in hand after 3 hours 32 minutes of pure leg gruel. Never again we said. Now we're not so sure but those short shorts are staying in the cupboard for the foreseeable. Brappppp...
Posted by Jimio at 13:24 No comments:

Heat you up, melt you down

Music has been all around us for the past three months and rightly so. There's been some right heat being let out of the traps. Check these for pure bliss and ting... 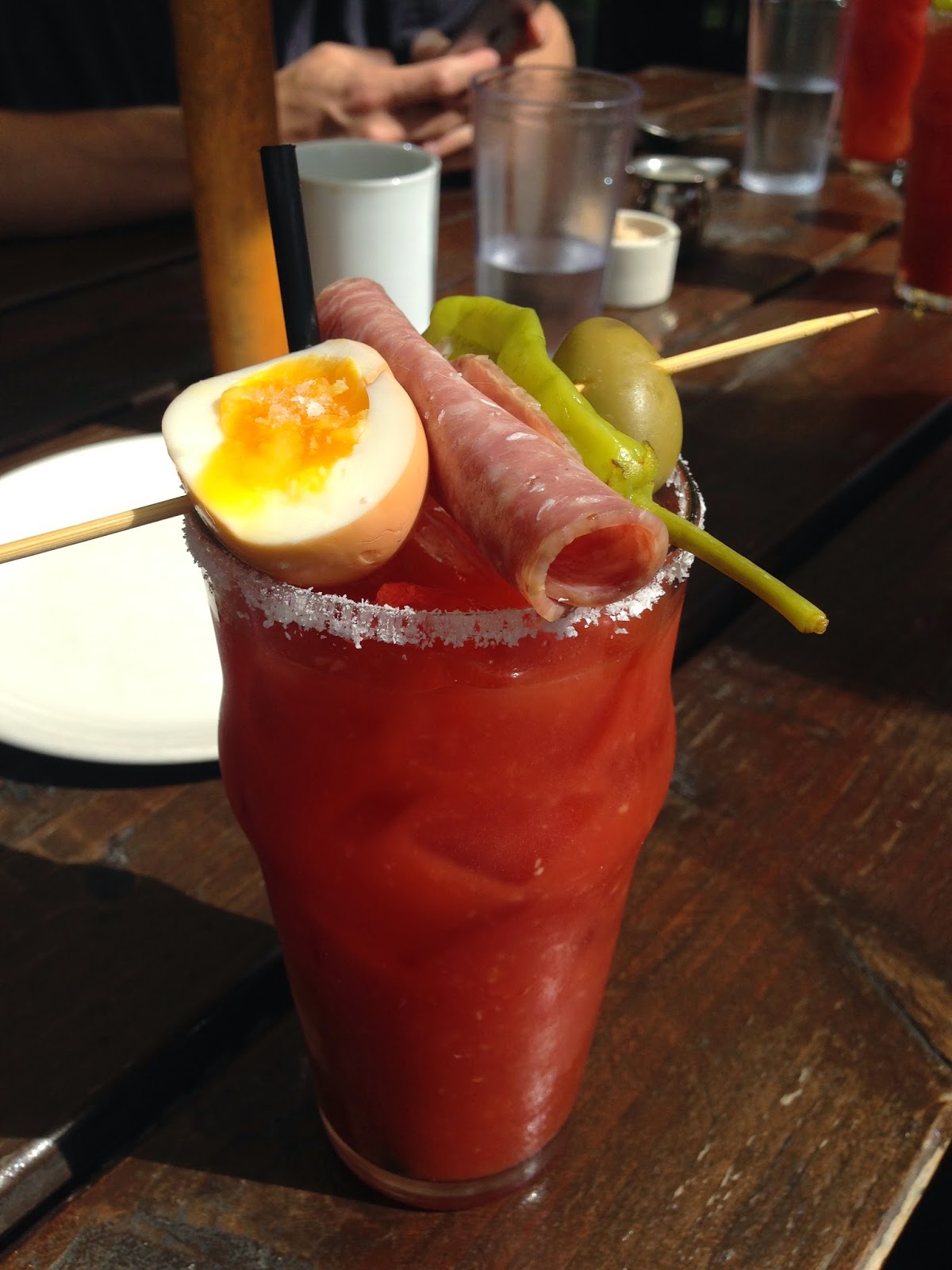 America is well known as the land of the free but Barack should really contemplate a rebrand before he gets the boot. Either the land of the fuck off Bloody Mary (see above), or just 'awesomeeeeee' - the drink and the word were two tings we constantly encountered on our recent jaunt across the sea to Portland, Oregon. To many of the Americans we met, pretty much everything from buying bog roll to their donkey dying was 'awesssommmmmeeeee'. There's no middle ground. It's a constant high level of positive vibes which is totally bewildering. Are they being sincere? If they drink those, Bloody Marys everyday, then yes mate they are. Life writhes around through a filter of vodka and tomato juice.

We started off our trip in the auspicious surroundings of Costa at Heathrow in the middle of a Tuesday night, utilising sandwiches and hot drinks as match sticks to prop our eye lids open while waiting for our flight - 12 hours, one stop in Frankfurt and many bevs later, we were in Seattle, being driven down to Portland for a stag/boat party/wedding parteh. Oh yes for this was the occasion of a big, splendid explosion of a hitching and mega marriage. 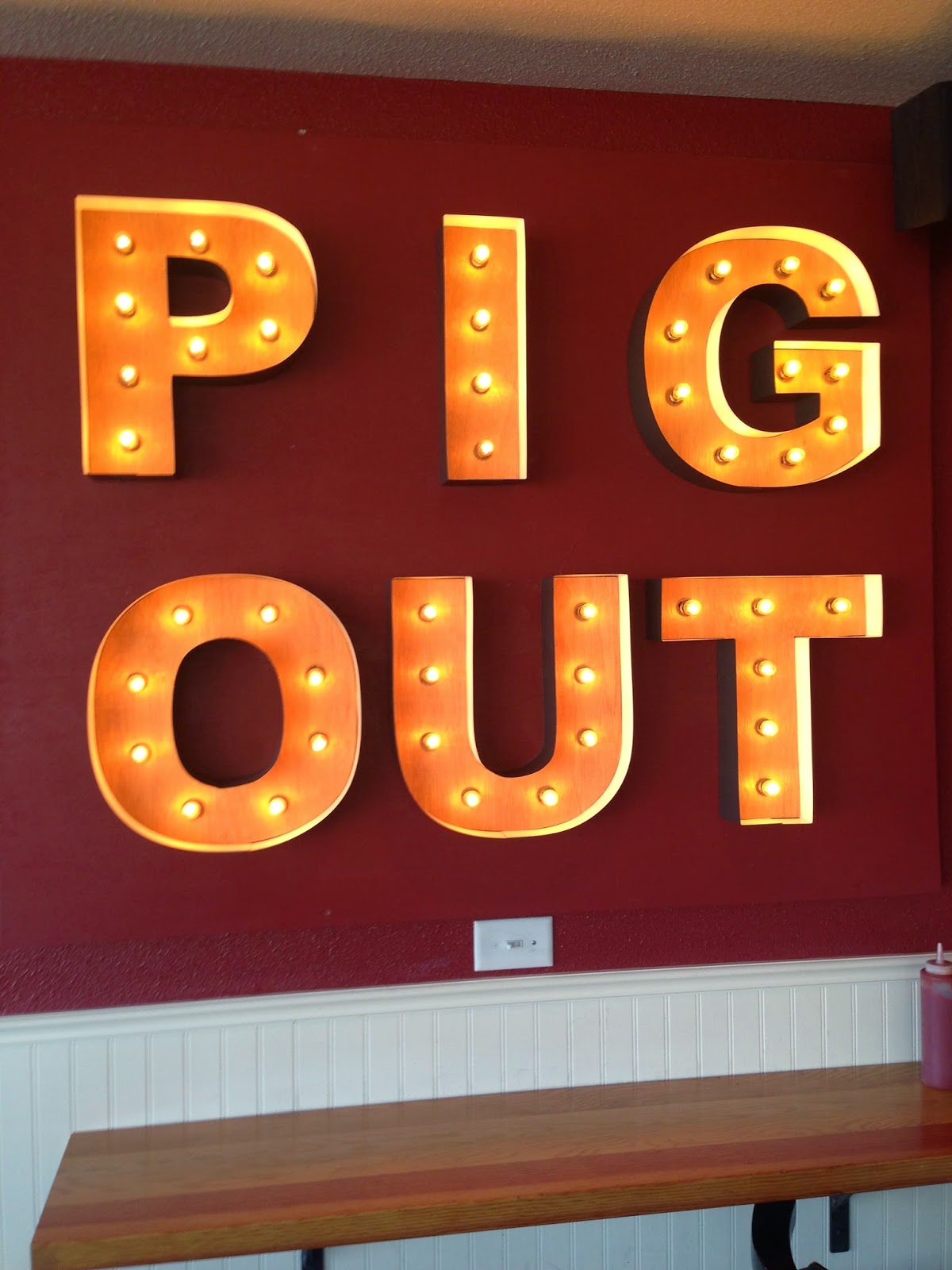 Yankee proceedings all kicked off at lunch time the following day in the wonderful Portland sun with a brace of craft ales and some dirty, artery stopping fries. This set the tone for the next two weeks - strong beers, gibberish chatting, getting lairy and eating extreme meals. The stag began in what felt like an industrial estate with an ever burgeoning number of revellers in our throng - friends, fam, parents, even baby Rocket find himself in the battle cruiser. We zig zagged our way around numerous breweries, boozers, karaoke joints, picking up t-shirts and fellow drunks enroute before ending up at notorious strip club, the Devil's Point. Ooof. As with many of the days to follow, getting back to our borrowed bed definitely happened. But no knows how. It's a modern day miracle. 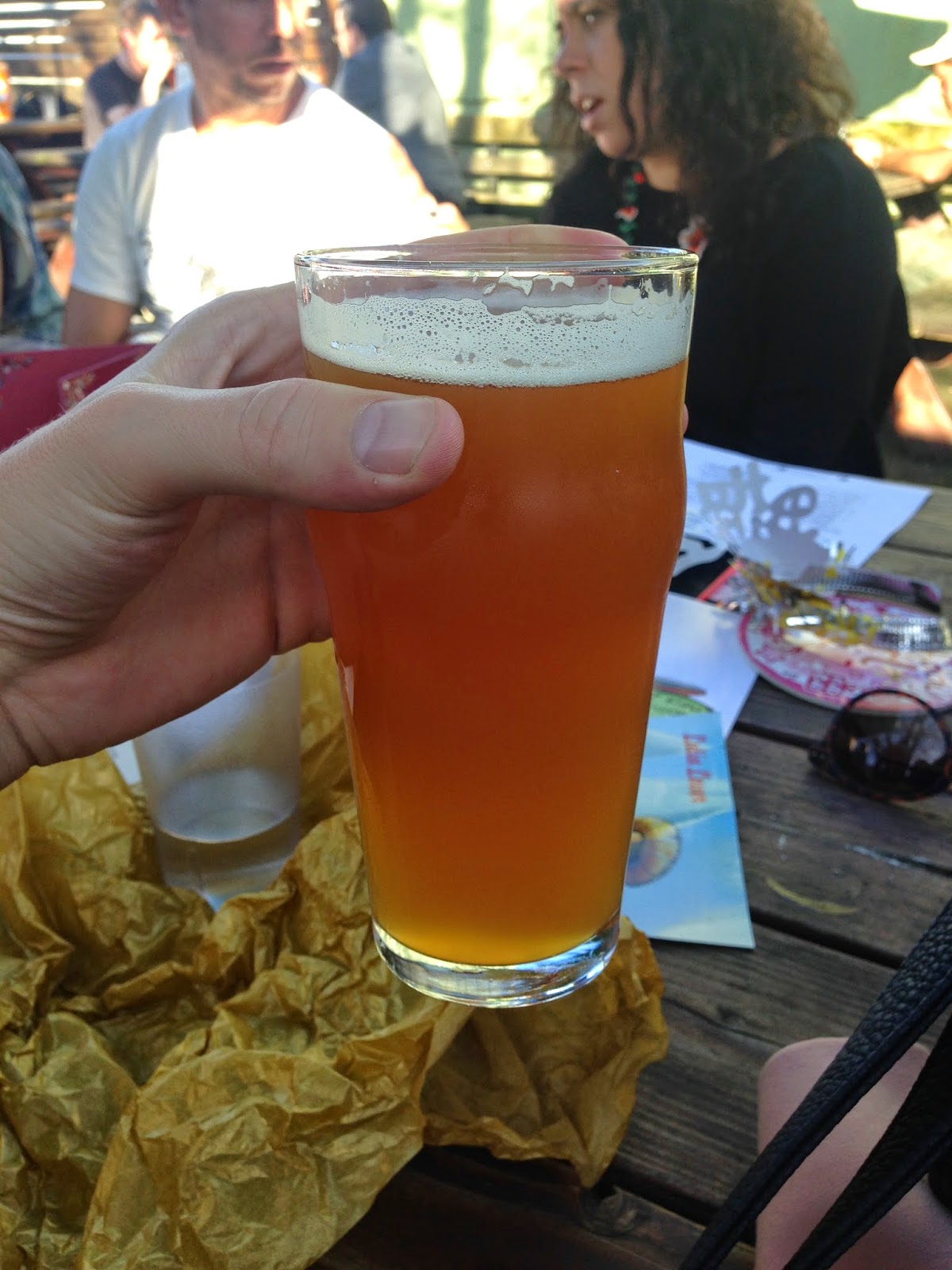 The stag certainly set the bar high for debauchery but one which we continually attempted to hurl ourselves over. 24 hours later we rebooted the party on an opulent booze cruise with families, banter and cake following a practice church wedding,which as groomsmen, we had to do (albeit drunk). The wedding day itself involved yet another boozy brunch at midday complete with scalding hot eggs and beers before we all got trussed up in our best garms and caught the bus to the church. An hour and a half later and the deed was done, a hitching which went off totally without a hitch. Well done to the happy couple! It was a classic do featuring a photo booth, craft ale, raw dancing and about as much Kendrick Lamar as you could wave a stick at.

Life after the wedding featured many, many big moments. For while we'd gone out for the do, we also had a few weeks just to stretch out and roll around in the American vibe. 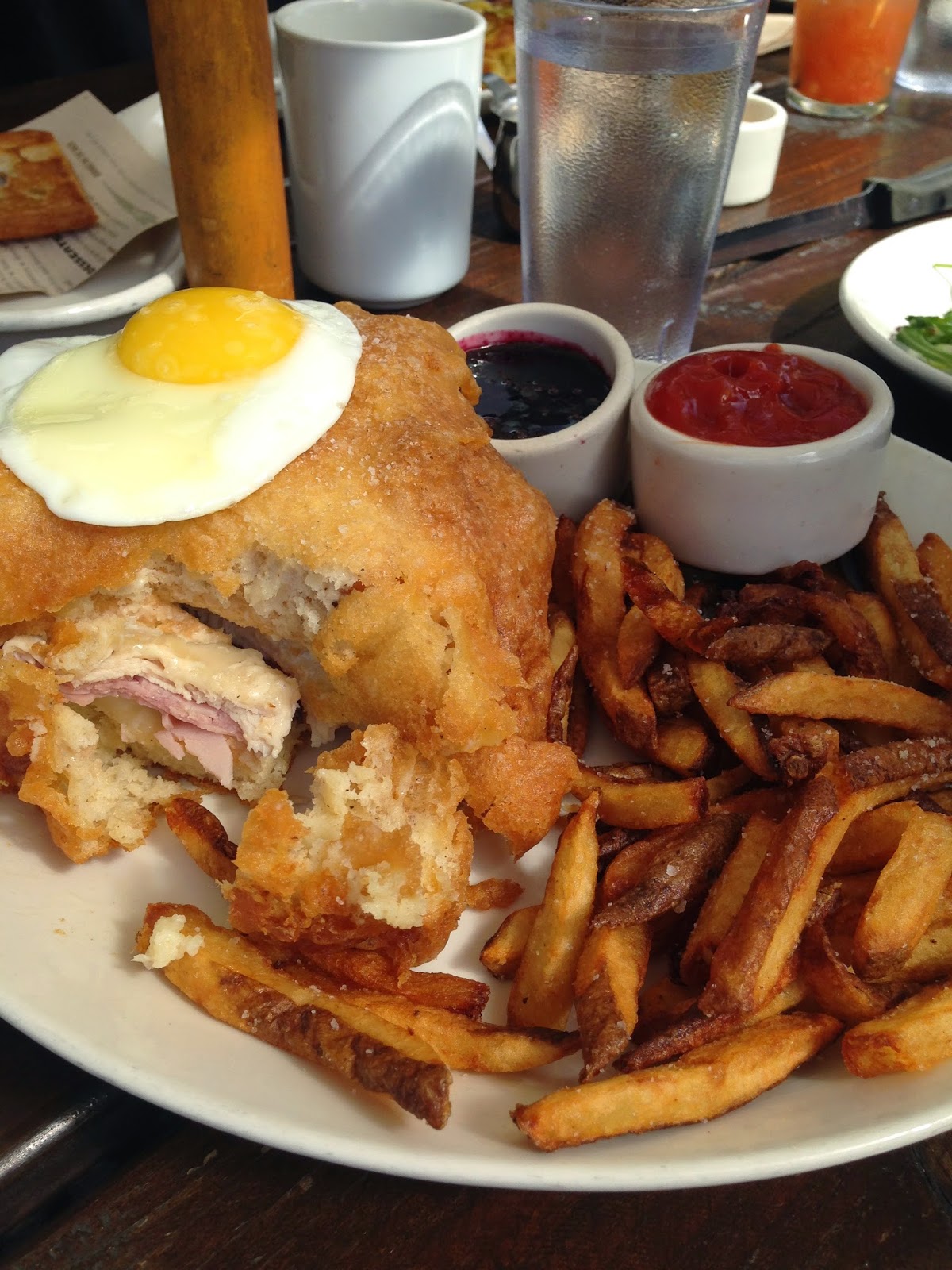 So what did we do? Stripparaoke at the Devil's Point was weird and mind opening. We discovered the Monte Cristo (see above), a sandwich so disgustingly greasy even we couldn't finish it. Bread inside batter with cheese, ham and turkey plus extra ham. We journeyed to Bend, three hours south of Portland and spent an afternoon exploring the many, many breweries of the town - we met a weird American, retired businessman turned dealer with six dogs called Randy. We met Jay-Z's light engineer (a dude called Loren) who invited us back to his huge house at four in the morning to drink his beers and watch his train set loop round and around his cavernous gaff. We went to Timberline Lodge, the eerie, snowbound ski lodge atop Mount Hood and walked the corridors where Jack Nicholson went so totally skitz in Stanley Kubrick's The Shining. There were many vibes to be had. 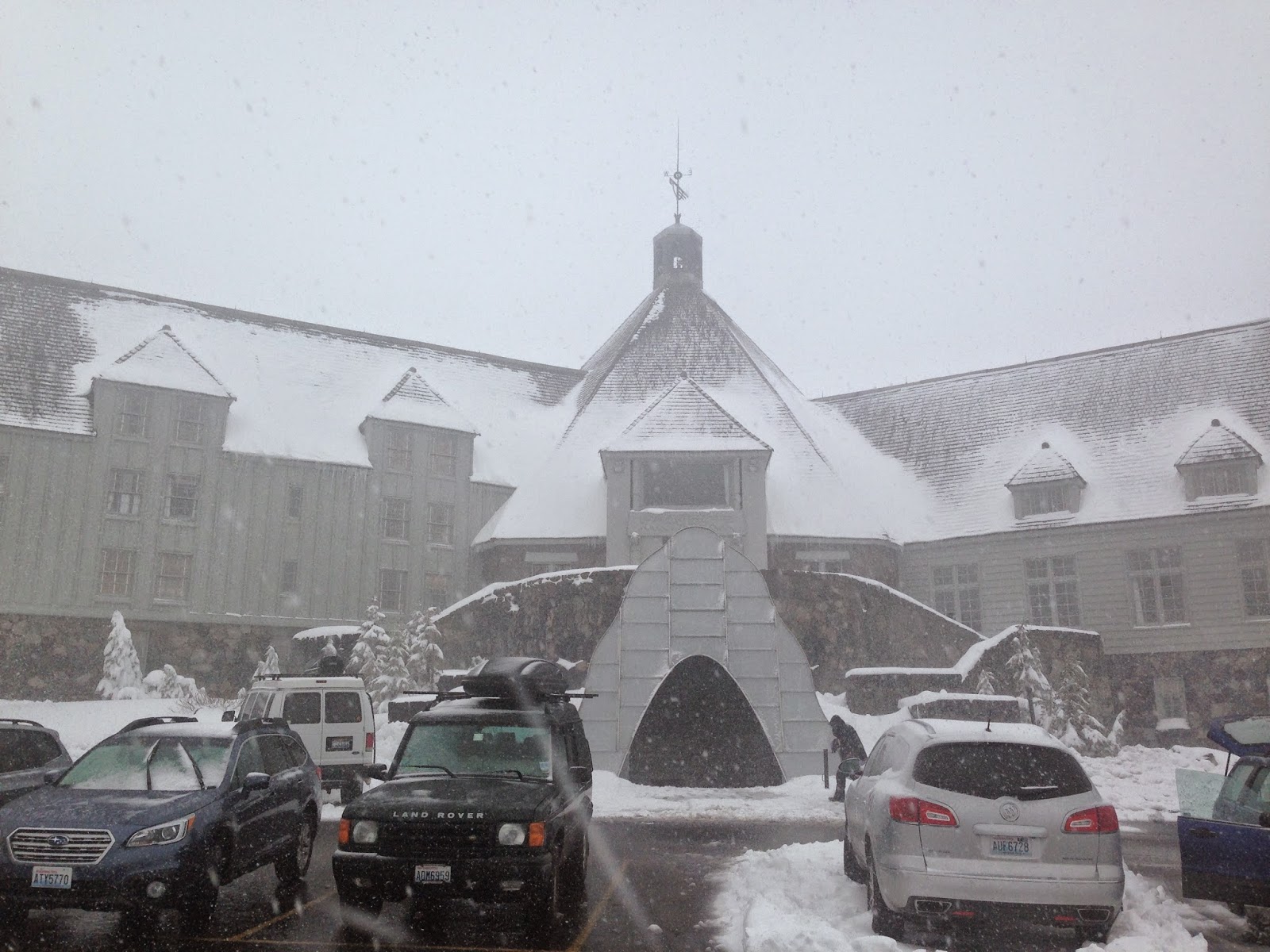 Our second road trip started off in Twin Peaks style misty rain and a lack of understanding about starting an automatic BMW. We went over to Cannon Beach (where the Goonies was filmed) and had a paddle before heading down to Cape Lookout and Pacific City, then going inland to McMinnville, a weird town in the middle of nowhere. We stayed at the Hotel Oregon, an inn with the names of famous and infamous Oregonians in every room. We had the pleasure of staying in a room named after James McBride, a dude who helped create Alaska - well done dude! The joint itself is like a shrine to aliens and the weird - the walls were adorned with creepy paintings while the town itself was supposedly the scene of a UFO sighting in the fifties.This sense of weird certainly seemed to have permeated the people we bumped into who were all totally fucking tapped. 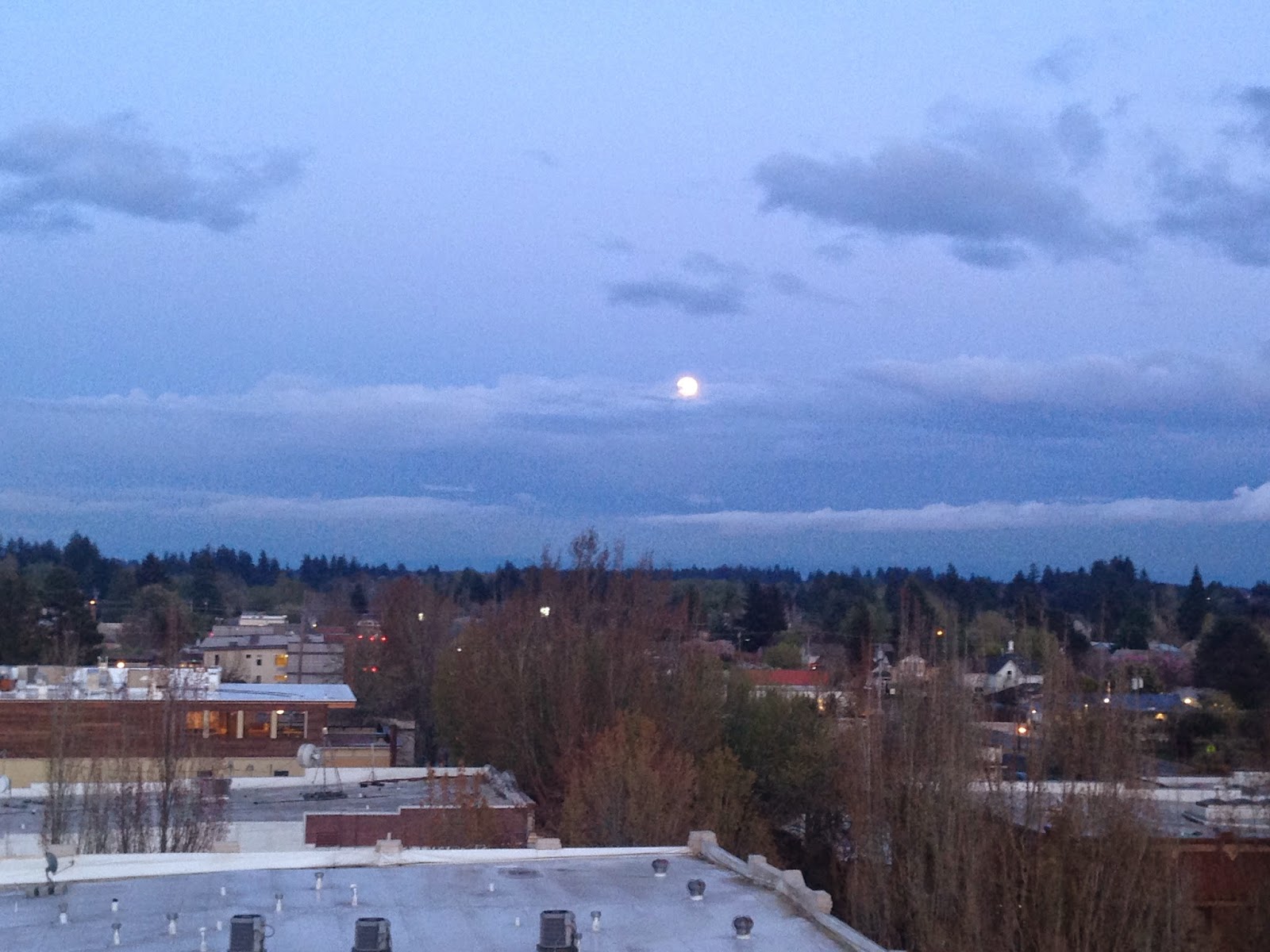 The rest of our time in Oregon was spent in Portland, taking in the laid bike, yet technologically tuned in vibe. 'We love the outdoors but we're also fans of Google Glass' seems to be the maxim by which folk live by. We continued to drink, went shopping, ate bbqs and even had a beard trim by a woman called Misty. Oh yes.

Our last few days in the states saw us get a bus back up to Seattle and spend three days marauding around. Again the vibe was ripe and steamy (in a good way) - we scoffed our faces, went to see a gig (from French electronic poppers Yelle), ate (more) fried food and caught Ru Paul's Drag Race being shown in a boozer. Throw in a bar open 24 hours to show David Lynch's Twin Peaks and seeing David Bowie's Goblin King outfit from Labyrinth and it was big. We were so sad to leave you America, hopefully see you again soon... 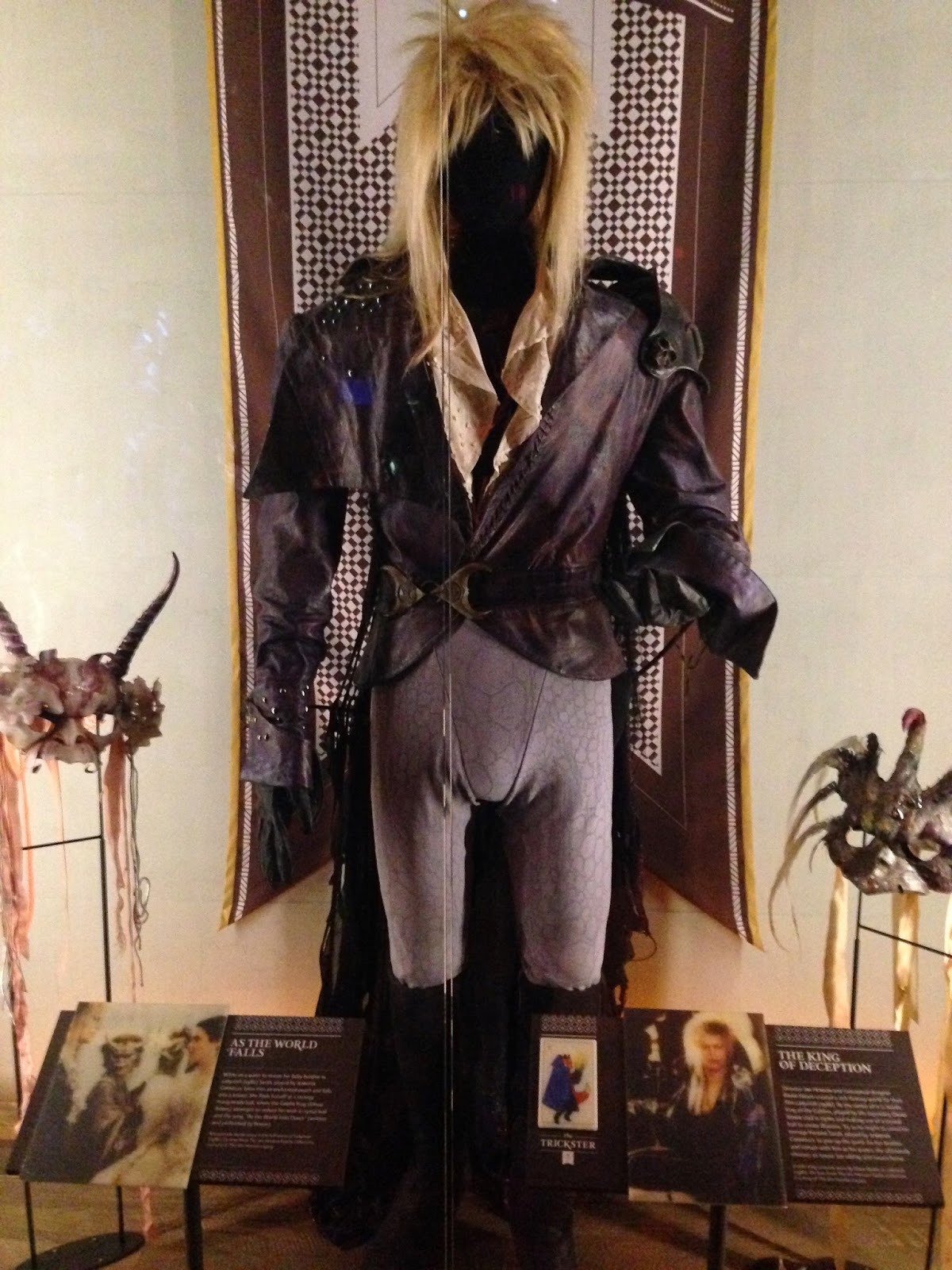